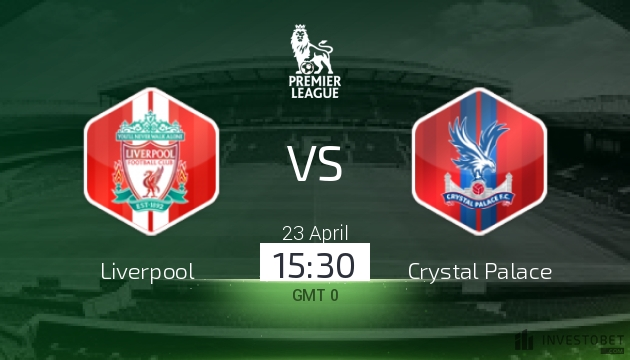 Liverpool will be aiming to take a step closer to the Champions League when they welcome Crystal Palace to Anfield this weekend.

Jurgen Klopp's charges ground out a 1-0 victory over West Bromwich Albion last weekend, with Tony Pulis' charges beaten in front of their own supporters at The Hawthorns. It was a massive win for Liverpool, particular as Manchester City, Manchester United and Arsenal all triumphed in their respective fixtures; the Reds remain six points clear of fifth spot in the race for the top four, although each of the three teams directly below them has played at least one game fewer. Champions League qualification remains in Liverpool's hands, though, and securing a return to Europe's principal continental club competition would mean that the 2016/17 campaign has to go down as a positive one for Klopp's side.

Palace moved seven points clear of the relegation zone last time out, as they fought back from two goals down to draw 2-2 with defending champions Leicester City. It took a while for Sam Allardyce to get his ideas across upon taking charge at Selhurst Park in December, but the former Bolton Wanderers, Blackburn Rovers and Sunderland boss has now overseen a significant turnaround in fortunes: Palace have lost only one of their last seven encounters in the top flight, a run which encompasses famous victories over Chelsea and Arsenal. The Eagles are much more resolute and defensively solid these days, while they have retained a considerable attacking threat through the likes of Andros Townsend, Yohan Cabaye, Wilfried Zaha and Christian Benteke.

Liverpool will have to make do without Sadio Mane (knee), Ragnar Klavan (knee), Adam Lallana (thigh), Jordan Henderson (foot) and Danny Ings (knee) for Sunday afternoon's clash. Divock Origi, Philippe Coutinho and Roberto Firmino will probably continue as the Reds' front three, with Emre Can, Gini Wijnaldum and Lucas Leiva as the midfield trio behind them.

Palace will again be unable to call upon the services of Loic Remy (calf), Scott Dann (knee), James Tomkins (calf), Connor Wickham (knee) and Pape Souare (leg) for their trip to the northwest. Mamadou Sakho is ineligible against his parent club, meanwhile, and Patrick van Aanholt could replace Jeff Schlupp at left-back after returning from a spell on the sidelines.

Taking everything into account, it could be worth backing Palace to escape Merseyside with a point on Sunday afternoon. The Reds look to have turned a corner after running into a sticky patch earlier in 2017, but they have struggled in home games against teams they are expected to beat this season and could therefore find things difficult against Allardyce's charges. Palace have emerged victorious from their last two visits to Anfield, moreover, and will not be fazed by the prospect of facing such illustrious opponents after their recent successes against Chelsea and Arsenal. A score draw could be the way to go here, then, while the odds available on 2-2 in the correct scoreline market make that another tempting proposition.