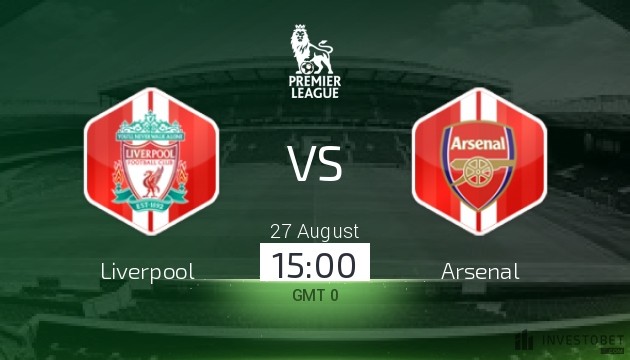 Liverpool and Arsenal will both be looking to lay down a marker when they lock horns at Anfield in this weekend’s standout Premier League fixture.

Jurgen Klopp’s men made it four points from a possible six last time out, when they beat Crystal Palace by a goal to nil in front of their own supporters. It was a vital victory for the Reds given that they had lost each of their previous encounters with Palace at Anfield, particularly after they threw away a 3-2 lead at Watford in second-half stoppage time the week before. It has been a mixed summer for Liverpool in the transfer market, with targets such as Naby Keita and Virgil van Dijk proving elusive but Mohamed Salah and Andrew Robertson both joining the club to strengthen the squad depth at Klopp’s disposal, while Philippe Coutinho has stayed put for at least another 12 months despite heavy interest from Barcelona. A top-four finish will be the minimum objective this term, but some of the more optimistic members of the club’s fan base may consider the title a realistic target in 2017/18.

Familiar failings have dogged Arsenal in the early weeks of the campaign: their defensive issues and lack of control were evident in both the 4-3 win against Leicester City and 1-0 defeat by Stoke City. The optimism that followed the north Londoners’ triumphs at Wembley in the FA Cup and Community Shield has now evaporated, while the club’s supporters will be concerned about recent reports linking Alexis Sanchez with Manchester City. Nevertheless, a positive result at Anfield on Sunday would go a long way to lifting the mood at the Emirates Stadium, as Arsenal attempt to secure a return to the Champions League and perhaps even launch a sustained challenge for the title this term.

Liverpool will be unable to call upon the services of Coutinho (back), Adam Lallana (thigh) and Nathaniel Clyne (hamstring) for the visit of Arsenal. Trent Alexander-Arnold could be preferred to Joe Gomez at right-back after the former sat out the victory over Palace, while Dejan Lovren will probably replace Ragnar Klavan in the heart of the defence. Mohamed Salah is also set to return to the starting XI and will provide pace at the top of the pitch, with Roberto Firmino likely to start through the middle and Sadio Mane on the opposite flank. Liverpool will press high up the pitch and look to do damage in transition, but they must be wary about leaving their centre-backs too isolated at the other end of the field.

Arsenal will have to make do without Santi Cazorla (leg), but Laurent Koscielny is available again following suspension and Sanchez could return to the starting line-up after an abdominal injury. Wenger could be tempted to ditch the 3-4-2-1 formation that he first began to employ back in April, with the Frenchman admitting last weekend that he was not convinced by his side’s central defence in the loss to Stoke. The return of Koscielny will certainly boost the Gunners’ chances of keeping Liverpool out, but they must also do more going forward – Mesut Ozil and Alexandre Lacazette were both very quiet last weekend, for instance.

Taking everything into account, it is probably worth backing Liverpool to come out on top this weekend. The Reds were unbeaten against fellow members of the top seven last term and seem ideally set up to enjoy success against a side like Arsenal, who still have several question marks hanging over them – particularly with regards to their midfield and defence. A home win therefore looks like the best bet here, with Mane an option worth considering in the anytime goalscorer market.