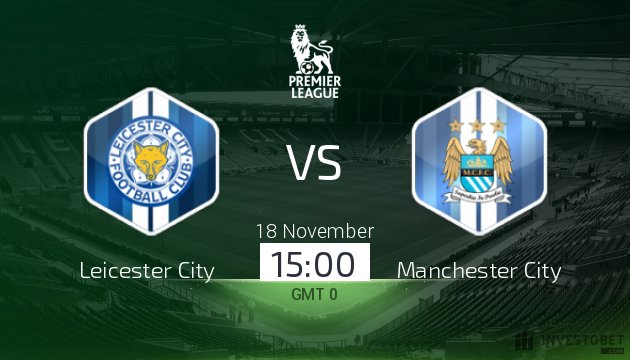 Manchester City will be looking to maintain their lead at the top of the Premier League table when they travel to the King Power Stadium to take on a revitalised Leicester City outfit on Saturday afternoon.

Pep Guardiola’s side have been in imperious form so far this season, winning 10 and drawing one of their first 11 top-flight encounters to open up an eight-point advantage at the summit of the standings. It is still early days and City have started previous campaigns strongly before fading as time goes on, but at the time of writing it is difficult to envisage a situation in which they throw away such a sizeable lead. Some of the football the Citizens have been producing has been scintillating, with Arsenal the latest team to be brushed aside prior to the November international break; perhaps of equal importance to their breath-taking attacking is their impressive defensive record, with only seven goals conceded so far this term – a record bettered only by second-placed Manchester United.

Leicester’s decision to sack Craig Shakespeare last month came as a surprise, with the 2016 champions having been handed a difficult start to the season by the fixture computer. More eyebrows were raised when the Foxes handed the reins to former Southampton head coach Claude Puel – the Frenchman was sacked at the end of last season despite an eight-place finish and appearance in the EFL Cup final – but the East Midlands outfit have climbed up the table in recent weeks and currently sit in 12th spot after taking seven points from the last nine available. A top-half finish suddenly looks like a realistic goal for Leicester once more.

Manchester City will again have to make do without Benjamin Mendy, who is out for the rest of the campaign with a serious knee injury, while Nicolas Otamendi (suspension) and club captain Vincent Kompany (calf) will also be missing from the backline. In better news for Guardiola, Fabian Delph – who has been deputising for Mendy at left-back – and Raheem Sterling are expected to be fit, with Sergio Aguero, Gabriel Jesus, Kevin De Bruyne, David Silva and Leroy Sane all looking to contribute in forward areas either from the start or as a substitute.

Leicester, meanwhile, will be unable to call upon the services of Robert Huth (foot) and Matty James (Achilles), but Vicente Iborra should shake off an ankle injury in time to feature and Ben Chilwell is back in contention following a knee problem. Demarai Gray looks set to retain his place in the starting XI having caught the eye in Puel’s first two encounters, while Riyad Mahrez could continue in a central role and will look to peel off Fernandinho and find space between the lines. At the top of the pitch, Jamie Vardy will either lead the line ahead of Mahrez or Shinji Okazaki, who remains a vital figure in this Leicester team due to his non-stop running and all-round work ethic.

It is difficult to look past another Manchester City triumph in this one, although Leicester may give them one of their toughest tests so far in 2017/18. An away win in a match featuring goals for both sides is therefore a tempting option at the King Power Stadium, while Sterling could be a good choice to find the back of the net anytime.