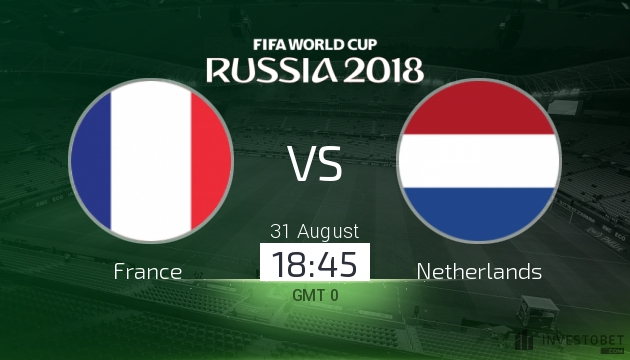 France and the Netherlands will each be looking to take a step closer to the 2018 World Cup when they go head-to-head on Thursday evening.

France are level on points with first-placed Sweden in Group A, but inferior goal difference means they head into this game in second spot in the standings. Didier Deschamps’ side have had to move on quickly from the disappointment that was their defeat by Portugal in the final of Euro 2016 on home soil, with France many people’s favourites to get their hands on the Jules Rimet trophy in 10 and a half months’ time. Four wins, a draw and a loss from their first six qualifying encounters up to now represents a decent return, but there is still plenty of work to do for Les Bleus as they attempt to overhaul Sweden at the top of the table and qualify automatically for the 2018 World Cup.

The Netherlands are down in third spot at present, although there is still enough time for them to climb into either first or second place. Having said that, the Dutch – who finished as World Cup runners-up in 1974, 1978 and 2010 – cannot afford many more slip-ups between now and the end of the campaign if they want to take part in the tournament next summer. Failing to qualify for an expanded European Championship in France last year was one of the lowest moments in the country’s football history, and missing out on a second successive competition would really emphasise how far the Netherlands have fallen in recent years. The hope is that Dick Advocaat can oversee an improvement after replacing Danny Blind at the helm in March, but many fans and observers continue to question whether the 69-year-old is the right man to take the three-time finalists forward.

Ousmane Dembele, Anthony Martial, Benjamin Mendy, Dimitri Payet, Kevin Gameiro, Raphael Varane and Tiemoue Bakayoko are not in the French squad for their meetings with the Netherlands on Thursday and Luxembourg on Monday, but Deschamps is not exactly short of options. Tottenham goalkeeper Hugo Lloris will start behind centre-halves Laurent Koscielny and Samuel Umtiti, with Djibril Sidibe and Layvin Kurzawa favourites for the two full-back places; in midfield, N’Golo Kante, Paul Pogba, Adrien Rabiot, Corentin Tolisso and Blaise Matuidi provide a range of attributes, as do Antoine Griezmann, Kingsley Coman, Kylian Mbappe, Thomas Lemar, Olivier Giroud and Alexandre Lacazette in forward areas. Les Bleus will look to dominate possession at the Stade de France, but they must also keep things tight at the back against Advocaat’s charges.

Taking everything into account, it is probably worth putting some money on a France victory this week. The range and depth of quality at Deschamps’ disposal means the hosts will probably prove too strong for an ailing Dutch side in front of their own supporters, with a win to nil one option worthy of consideration. In the anytime goalscorer market, meanwhile, in-form midfielder Pogba could be a wise choice.