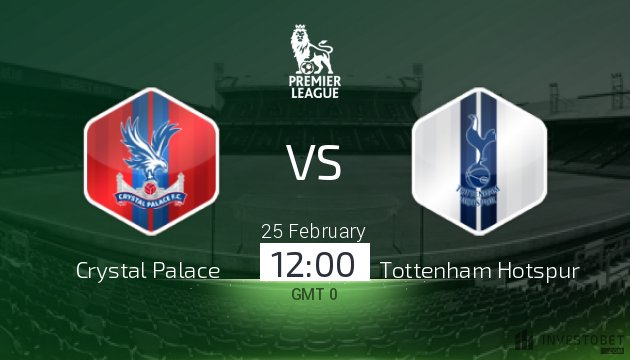 Tottenham Hotspur can climb into the top four of the Premier League - at least for a few hours - with victory over Crystal Palace in the early kick-off on Sunday.

Mauricio Pochettino's men have been in excellent form of late, although they could only manage a 2-2 draw against Rochdale in the fifth round of the FA Cup last time out. Before that, though, Spurs extended their unbeaten run in the Premier League to nine matches with a 1-0 triumph over local rivals Arsenal, a game in which the margin of victory could easily have been much larger given the number of chances the home side created at Wembley. Spurs have also turned in excellent displays against Juventus, Liverpool and Manchester United in the last few weeks, but taking on Palace represents a different task altogether for Pochettino and his players.

Crystal Palace have only lost three of their last 16 encounters in the top flight, but they still find themselves locked in a battle against relegation. Roy Hodgson has overseen a general upturn in performance levels and results since replacing Frank de Boer in September, but it is now four games without a win for the Eagles, who face a tricky few weeks in terms of fixtures. Palace still have enough quality within their squad to stay up comfortably, but a host of injuries has hamstrung Hodgson and means the south Londoners’ fate may not be sealed one way or another until the final weeks of the campaign.

Spurs have no fresh injury concerns ahead of Sunday's London derby, although Harry Winks is still working his way back to fitness following a spell on the sidelines. Toby Alderweireld could make his return to a starting XI in the Premier League, which opens up the option of Pochettino switching to a three-man backline; the Belgian may have to content himself with a place among the substitutes, though, with Davinson Sanchez and Jan Vertonghen likely to begin the match if Spurs opt for two players in the heart of the defence. Further forward, Son Heung-min, Dele Alli, Christian Eriksen and Harry Kane form a front four which must be the envy of Hodgson and several other managers in the division.

Palace, meanwhile, will be unable to call upon the services of Wilfried Zaha (knee), Julian Speroni (knee), Connor Wickham (knee), Bakary Sako (ankle), Jeff Schlupp (knee), Ruben Loftus-Cheek (ankle), Scott Dann (knee) and Jason Puncheon (knee), but defensive duo Mamadou Sakho (calf) and Martin Kelly (hamstring) could both return. Hodgson deployed January acquisition Alexander Sorloth on the flank against Everton and could do the same here, with the targetman centre-forward drifting up front whenever possible. A midfield trio of Yohan Cabaye, James McArthur and Luka Milivojevic possesses plenty of energy and lung power, but whether the hosts will have enough invention to trouble Tottenham's defensive unit remains to be seen.

Taking everything into account, it is probably worth backing an away win at Selhurst Park on Sunday afternoon. Palace are a vastly different proposition without star man Zaha and may struggle to get at one of the tightest backlines in the division, particularly as Christian Benteke has been extremely profligate in front of goal for the majority of the campaign. A Tottenham triumph to nil looks like a good choice as far as a result is concerned, while Alli could be a sensible selection to find the back of the net anytime.