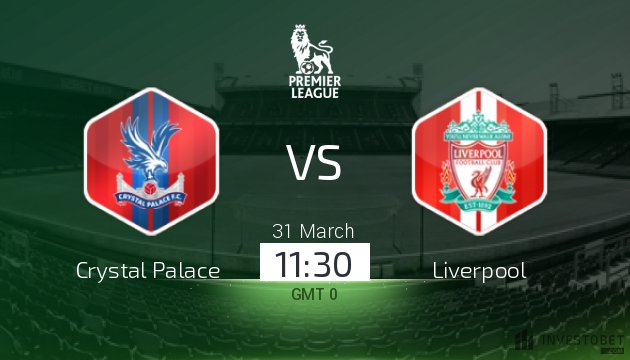 Liverpool will be looking to boost their top-four chances when they travel to Crystal Palace for the early kick-off on Saturday afternoon.

Jurgen Klopp’s charges will move 10 points clear of fifth-placed Chelsea before the Blues face Tottenham Hotspur on Sunday if they are able to emerge victorious in south London. A 5-0 thumping of Watford prior to the international break saw the Reds consolidate their place in the Champions League qualification spots on a weekend in which all of their direct rivals were participating in the FA Cup; while Klopp would no doubt relish the chance to win his first piece of silverware at Anfield in the form of England’s principal knockout competition, the fact Liverpool were knocked out by West Bromwich Albion in the fourth round perhaps give his team a better shot at finishing in the top four. That convincing triumph over Watford also marked a welcome return to winning ways after the 2-1 loss to Manchester United at Old Trafford, a result which gave the Red Devils the advantage in the race for second. United are still firm favourites to finish behind Manchester City, but another Liverpool success here would make things interesting.

Palace also picked up three points last time out, beating relegation rivals Huddersfield Town by two goals to nil to move two points clear of the drop zone. It was a much-needed win for Roy Hodgson’s side, who had gone without one in their previous seven encounters, and it is understandable that optimism is slowly returning to Selhurst Park due to the re-availability of several key players. Palace have underachieved  this term but there is little doubt that they have been hampered by an injury crisis in the last couple of months, with 12 first-team players all on the treatment table at one stage. Hodgson will be delighted that the likes of Mamadou Sakho, Yohan Cabaye, Ruben Loftus-Cheek and star man Wilfried Zaha are fit once more, but there is still little room for error given the slender margin between the Eagles and the bottom three.

Liverpool will have to make do without Joe Gomez (ankle), but Emre Can (back), Dejan Lovren (ankle) and Andy Robertson (dead leg) are all expected to be available. A front three of Sadio Mane, Roberto Firmino and Premier League top scorer Mohamed Salah is capable of doing damage against any opponent in Europe, so Palace will have their hands full trying to keep that trio quiet. Loris Karius is now firmly established as Klopp’s favoured option between the sticks, but it’s still not clear which of Lovren or Joel Matip is his preferred choice alongside January addition Virgil van Dijk in the heart of the backline.

Palace will be unable to call upon the services of Jeff Schlupp (ankle), Alexander Sorloth (hamstring), Joel Ward (muscular), Julian Speroni (knee) and Bakary Sako (knee), while Zaha will be assessed after picking up a knock against Huddersfield. Connor Wickham is nearing a return following a serious knee injury but is unlikely to be involved here, while Scott Dann and Jason Puncheon (both knee) are both out for the remainder of the campaign. The Eagles caused Manchester City problems earlier this season with an approach based on sitting deep but counter-attacking with speed whenever the opportunity presented itself, so the hosts are likely to opt for a similar approach here.

Despite Palace’s decent record against Liverpool in the last few seasons, it is difficult to look past an away win at Selhurst Park. Palace will be buoyed by the recent return of several important players, but their opponents’ attacking firepower should prove too much for Hodgson’s side. An away win with both teams to score looks the best option for this one.