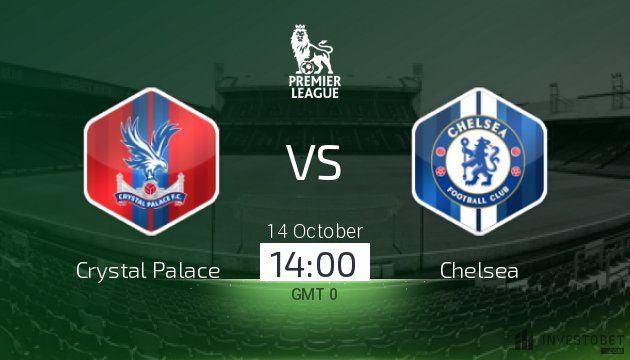 Chelsea will be looking to close the gap separating them from the Manchester clubs at the top of the Premier League table when they travel across London to lock horns with Crystal Palace on Saturday.

Antonio Conte's side suffered their second home defeat of the season last time out, when they went down by a goal to nil against Manchester City. That defeat leaves the defending champions six points off the pace at the summit of the standings heading into this weekend's counter, but it is worth bearing in mind that they also made a slow start last term and still went on to win the league at a canter. There are, however, legitimate questions about the Blues' squad depth this time around, particularly as many of their domestic rivals have got significantly stronger since the conclusion of the 2017/18 campaign.

Palace have no real reasons for optimism right now: not only have the south Londoners failed to win any of their seven games so far, they are yet to even score a goal. The appointment of Roy Hodgson in place of Frank de Boer has not yet resulted in an upturn in fortunes, and the concern for Palace is that they will have to accumulate points at a fairly high rate in their remaining 31 fixtures if they are to pull themselves out of trouble at the wrong end of the table. There is talent within the first XI, though, and Palace have been in precarious positions on several occasions in recent seasons and successfully negotiated the threat of relegation each time.

Chelsea will have to make do without N'Golo Kante, who contracted a hamstring injury while on international duty with France, and Alvaro Morata (hamstring); Danny Drinkwater, a contender to replace Kante in the centre of the park, will be assessed before kick-off to gauge whether he is fit enough to feature following a calf problem. Conte replaced Morata with Willian when the Spaniard was taken off against City, yet Michy Batshuayi - a conventional No.9 - will almost certainly start up top on this occasion. Cesc Fabregas and Tiemoue Bakayoko are likely to be deployed in midfield as Chelsea switch back to a 3-4-2-1 formation, with Victor Moses set to resume right wing-back duties against the club where he began his career in the 2000s.

The biggest dilemma facing Hodgson is how to replace Christian Benteke, who sustained a knee injury in the heavy defeat by Manchester City last month. Bakary Sako was selected to lead the line at Old Trafford last time out and again looks like the best option here, but the former Wolves winger is not exactly known for his goal threat and repeatedly drifted towards the flanks against United. The likely return of Wilfried Zaha is undoubtedly a major boost, though: the Ivory Coast international is the Eagles' standout player and possesses the quality to cause problems for any defender in the division on his day. Ruben Loftus-Cheek remains sidelined with a thigh strain, while Scott Dann (knock) and Connor Wickham (knee) will also be absent.

It is difficult to look past an away win in south London, although this may finally be the game in which Palace - who will be boosted by the return of Zaha - find the net for the first time this term. Nevertheless, Chelsea will surely prove too strong for the hosts on Saturday, which makes a victory for the champions with both teams to score a tempting proposition. In the anytime goalscorer market, Batshuayi would be a wise selection as he attempts to step into the shoes of Morata and help Chelsea keep pace with the two Manchester outfits at the summit of the standings.