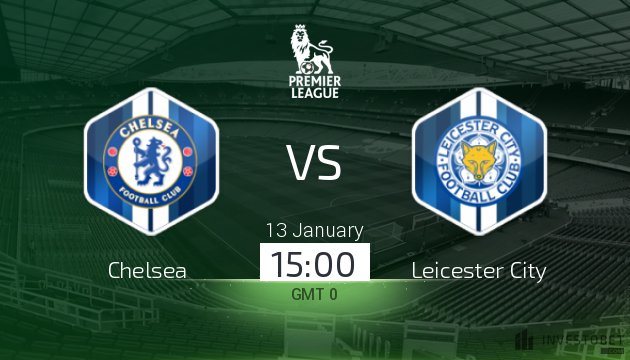 Premier League champions Chelsea will be looking to continue their brilliant home form when Leicester City travel to Stamford Bridge on Saturday afternoon.

Antonio Conte’s men were held to a draw in their last Premier League encounter, playing out an entertaining 2-2 tie at Arsenal last week. The Blues performance well on the night but their failure to emerge victorious saw them fall further behind runaway leaders Manchester City – heading into this weekend’s round of fixtures, the gap stands at 16 points – but Conte has already ruled his team out of the title race and is instead focused on the battle for the top four. Chelsea also have a Champions League round of 16 clash with Barcelona on the horizon, but for now they will be concentrating on the task that awaits them on Saturday, when the west Londoners will be searching for an eighth consecutive top-flight triumph in front of their own supporters.

Leicester brought a four-match run without a win in the Premier League to an end last time out, easing to a 3-0 victory over Huddersfield Town. That result kept Claude Puel’s side in eighth place in the table, with only four points now separating them from Burnley in seventh; the former Southampton manager was seen as a surprising and slightly underwhelming appointment when he replaced Craig Shakespeare in the King Power Stadium hot seat, but he has done a fine job since assuming control. Leicester have rediscovered their attacking zest while also underdoing a slight evolution in the way they construct moves, all of which bodes well for the remainder of the campaign.

Ross Barkley could make his league debut for Chelsea after signing from Everton last week, but a place on the substitutes’ bench looks more likely than a spot in the starting XI. David Luiz has shaken off a knee injury and is therefore available for selection once more, although Andreas Christensen’s performances in the centre of the back three have largely been excellent. It will be interesting to see whether Conte opts for a 3-5-1-1 or 3-4-2-1 formation, but perhaps the latter is more likely with one of Willian or Pedro Rodriguez operating from the right.

Puel will have to make do without Wes Morgan (hamstring), Danny Simpson (hamstring) and Robert Huth (match fitness), but Jamie Vardy is available after a groin injury and Christian Fuchs has recovered from illness. Riyad Mahrez has been heavily linked with a move away from the King Power Stadium this month but will start on Saturday, with Demarai Gray and Marc Albrighton also in line to feature. In midfield, meanwhile, summer signing Adrien Silva could be handed his first Premier League start alongside Wilfred Ndidi.

This should be an interesting encounter at Stamford Bridge, with Leicester’s counter-attacking speed capable of causing problems to any team in the division. Chelsea are strong at Stamford Bridge, though, and in Eden Hazard possess a player who is virtually unplayable on his day. A narrow win for Conte’s men therefore looks like the most probable outcome in this one, although it could also be worth backing both teams to find the net on Saturday afternoon. In terms of an anytime goalscorer, Foxes frontman Vardy represents value for money.