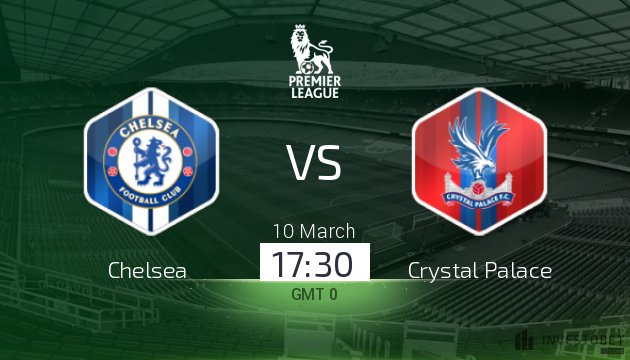 Chelsea will be looking to bounce back from consecutive losses in Manchester when they do battle with London rivals Crystal Palace at Stamford Bridge this weekend.

Antonio Conte's side fell five points adrift of the top four last time out, when a meek display unsurprisingly yielded zero goals and zero points against Manchester City at the Etihad Stadium. The Blues were well within their rights to form a compact, defensive shape without the ball - numerous sides have been blown away by this phenomenal City team - but the reigning champions posed little threat in transition and were guilty of sloppiness in possession throughout the 90 minutes. It was an even worse performance than the previous week, when Chelsea threw away a one-goal lead to lose 2-1 to Manchester United, and there is now an awful lot of work for Conte and his players to do if they are to qualify for next season's edition of the Champions League. A home clash against relegation strugglers might seem like the ideal way to bounce back, but Chelsea simply cannot afford to lose on Saturday and that adds pressure ahead of the visit of Roy Hodgson's charges.

Crystal Palace have won twice at Stamford Bridge in the last three campaigns and may be quietly confident of nicking at least a point this weekend. Their self-belief would certainly have been boosted had they held on the two-goal lead they established against Manchester United on Monday night. Unfortunately for Roy Hodgson and co. Palace's backline was breached on three occasions after Patrick van Aanholt's strike, which left them without as much as a point after a highly creditable performance. Picking his players up from that disappointment will be a tough task even for a manager of Hodgson's experience.

Conte will be unable to call upon the services of Ethan Ampadu (hamstring), but N'Golo Kante is available once more following a bout of illness. Chelsea are likely to stick with a 3-4-2-1 formation, albeit with Eden Hazard moving from false nine to left-sided inside forward and one of Alvaro Morata or Olivier Giroud leading the line up top. Danny Drinkwater and Cesc Fabregas were both ineffectual against City and at least one – probably the former – will make way here, while Willian is favourite to get the nod ahead of Pedro Rodriguez on the right-hand side.

Palace have been hit hard by a significant injury crisis in recent months and Hodgson will again have to make do without Wilfried Zaha (knee), Yohan Cabaye (abductor), Joel Ward (muscle), Mamadou Sakho (calf), Julian Speroni (knee), Bakary Sako (ankle), Scott Dann (knee), Jason Puncheon (knee) and Connor Wickham (knee), while loanee Ruben Loftus-Cheek would be ineligible to appear against his former club even if he was fit.

Chelsea have struggled in recent weeks and their showings against Manchester United and Manchester City were extremely poor, but they should return to winning ways in front of their own supporters in the late kick-off on Saturday. Palace have been wounded by a lengthy injury list and have found it difficult to get at opponents in recent games, so backing a home win to nil could be worthwhile despite the Blues' poor performances in the last few weeks.