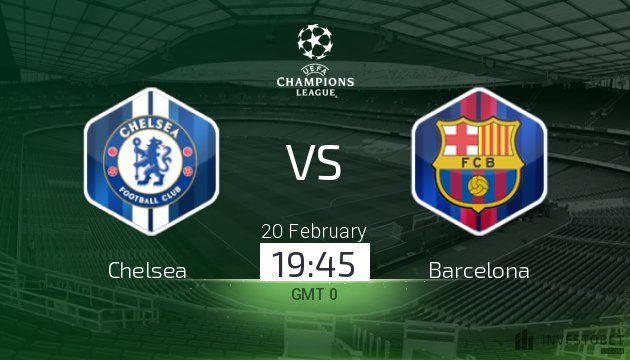 Premier League champions Chelsea will welcome La Liga leaders Barcelona to Stamford Bridge on Tuesday night for the first leg of the pair's Champions League round of 16 clash.

Antonio Conte's men progressed to the knockout stage of the tournament by finishing second in their group, pipping Diego Simeone's Atletico Madrid to the final qualification spot behind Roma. Chelsea's performances in Europe were mixed prior to Christmas, with a superb showing in an away win at Atletico preceding two disappointing displays against Roma, and the west Londoners' failure to finish on top of the pile saw them handed a difficult draw in the last 16. The Blues have encountered a fair few problems domestically in recent weeks, exiting the EFL Cup at the hands of Arsenal and losing ground in the race for second spot in the Premier League after shock - and comprehensive - defeats by Bournemouth and Watford, but there is hope around Stamford Bridge that Chelsea will raise their game when Barcelona come to town.

The Catalan club finished on top of Group D ahead of Juventus, Sporting CP and Olympiacos, winning four and drawing two of their six encounters to advance with a minimum of fuss. Barcelona have a strong European tradition since the Champions League’s rebrand – with four triumphs to their name, they have won the competition in the years since 1992/93 more than anyone but Real Madrid – but they have fallen short in recent seasons, exiting at the quarter-final stage in the two terms since their most recent success in 2014/15. The La Liga title is not quite wrapped up yet but Ernesto Valverde’s men are in pole position to finish on top of the pile in Spain, so they will probably focus much of their attention on the Champions League in the next three and a half months.

Chelsea will have to make do without the services of Tiemoue Bakayoko (knock) and David Luiz (knock), but Marcos Alonso should be available once more following an ankle issue and Ross Barkley has shaken off a hamstring problem. Conte has opted for a 3-5-1-1 formation in some of his team’s bigger games this season and could opt for that shape here, with Eden Hazard deployed behind either Alvaro Morata or Olivier Giroud. Pedro Rodriguez and Willian are options out wide if Chelsea go with the 3-4-2-1, however, with N’Golo Kante and Cesc Fabregas likely to partner one another in the centre of the park.

Valverde will be unable to call upon right-back Nelson Semedo (suspension), Philippe Coutinho (cup tied) and Sergi Samper, who is out for the rest of the season with an ankle injury. Valverde has switched between 4-3-3 and 4-4-2 diamond formations throughout 2017/18 and will probably opt for the latter here, with Lionel Messi and Luis Suarez fielded ahead of Sergio Busquets, Paulinho, Andres Iniesta and Ivan Rakitic. At the back, Samuel Umtiti and Gerard Pique will continue a partnership which has looked impressive for much of the campaign.

Taking everything into account, it is probably worth backing an away win at Stamford Bridge on Tuesday evening. Chelsea will look to make life difficult for the Catalan outfit but could ultimately be undone by Barca's superior attacking quality, with the likes of Messi and Suarez capable of causing problems for any defensive unit on the planet. The hosts will rely heavily upon the talents of Hazard to make a breakthrough at the other end, but Chelsea will do well to avoid taking a first-leg deficit to the Camp Nou.