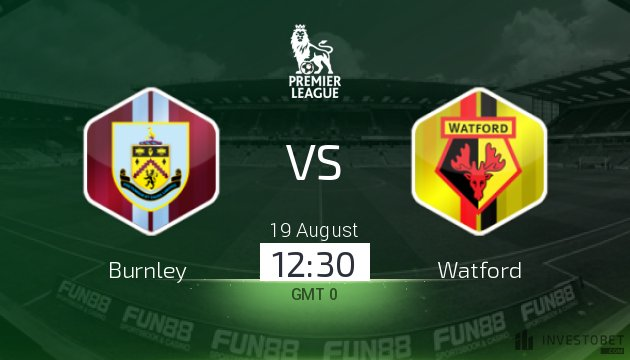 As two of the more ordinary sides in the Premier League, a fast start for both squads feels absolutely essential. With Watford unable to snag any major signings after Richarlison left, Javi Gracia could have a tough job on his hands this year. With a shocking away record last year, matched with Burley being strong at home, this could be an early acid test for the Spaniard.

Sean Dyche, though, will need to come through the other side of a testing tie with Istanbul BB from Turkey on Thursday. Will that hamper Burnley?

We expect Burnley to continue with their standard 4-4-1-1. While they are missing players like Matej Vydra and Robbie Brady through injury, the keeper crisis is over with Joe Hart experts to start again in goal for the Clarets.

Expect Jeff Hendrick to play just off Chris Wood in a rather agricultural but effective front pairing.

Watford, meanwhile, will be without a few players of their own. There are doubts over Nathaniel Chalobah and Gerard Deulofeu, but also Younes Kaboul and Stefano Okaka.

The loss of so many players might make it hard for Watford to mix it up, so we expect a standard 4-4-2 with Troy Deeney and Andre Gray up top together.

It’s hard to say, but we could see this being a draw. Expect a tight, fractious affair, particularly as Burnley may be tired after Thursday's extra-time exploits.