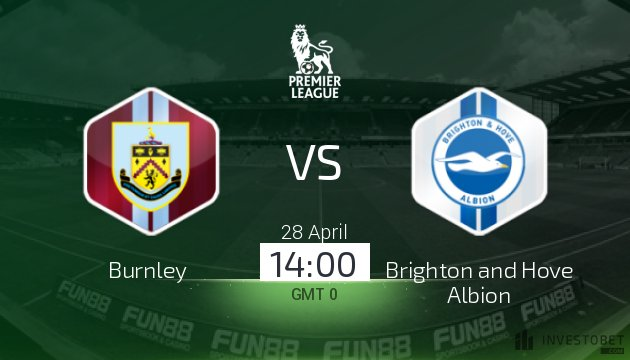 Burnley need only a point to secure their return to European competition for the first time since 1967, following Chelsea's FA Cup semi-final victory over Southampton. The Clarets came from behind to claim a point at relegation-threatened Stoke last weekend, 24 hours before Antonio Conte's men opened up that seventh spot as a ticket into next season's Europa League.

Victory over Brighton would make it certain - and keep alive their slim hopes of nicking sixth spot away from Arsenal - but a draw would leave Everton needing to make up a deficit of 17 in the goal difference column, even if they did win their game at Huddersfield, a margin they would probably struggle to bridge across an entire season in their current state.

So there's plenty of mileage in the stalemate at Turf Moor because the same solitary point could feel like three to the Seagulls with their survival not yet guaranteed. They currently have a seven-point cushion over Southampton but a tiny bit more security would be most welcome before wrapping up with games against Manchester United, Manchester City and Liverpool.

Confidence in this wager should only be enhanced the many similarities between the two clubs and their respective managers. Sean Dyche and Chris Hughton are both guardian-temperament, safety-first managers who have charted similar paths and we shouldn't be overly surprised that five of their six previous meetings have finished all-square.

Hughton is the more experienced by two years and 93 matches but Dyche, who becomes the Premier League's second-longest serving manager in the summer when Arsene Wenger steps down, has a 15-month head-start on his counterpart. Eddie Howe and Mauricio Pochettino are the only other top-flight managers to have been incumbent longer than Hughton.

All of which says plenty about where both men currently stand in the overall scheme of their own projects. There's little disputing that Burnley are more established and more accomplished as a Premier League entity, but four draws in four meetings with the Seagulls since January 2014 emphasises how hard the two teams are to separate whenever they go head-to-head.

And the comparisons don't end there. Similar managers means similar cultures, which also leads to similar players. Ashley Barnes, Chris Wood and Stephen Ward have all played for Albion previously, while the two clubs spent the best part of six months embroiled in an epic tussle for the services of Dale Stephens last season.

Burnley made six bids in total for the most important cog in Brighton's engine room, rising to £8m, but owner Tony Bloom stood firm. Stephens, who handed in a transfer request at one point, eventually fulfilled his Premier League dream at the Amex a few months later and now declares himself grateful for the way everything has panned out.

Dyche ultimately got what he wanted from Swansea in the shape of Jack Cork last summer, spending the money earmarked for Stephens, plus a couple of million in add-ons. The 28-year-old former Chelsea man is the only outfield player to have played every minute of every Premier League game this season, with Stephens not far behind in sixth.

If the two teams do cancel each other out, those two seasoned and stable campaigners, born just 13 days apart, could be the key reason. There's also two stats worth pointing out: Burnley have only scored 15 goals at home this season, the lowest in the division, while Brighton have only conceded 22 on the road, fewer than Liverpool, Arsenal and 14 other clubs.