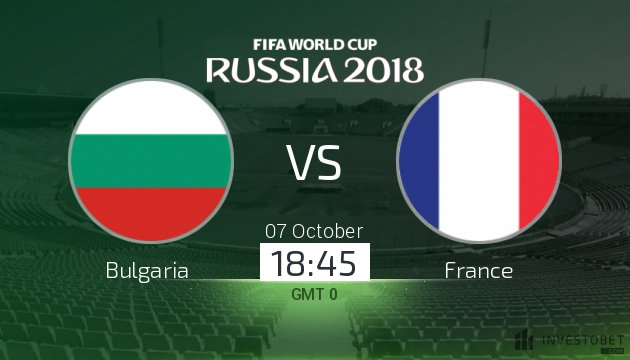 France will move one step closer to securing a place at the 2018 World Cup if they beat Bulgaria on Saturday.

Les Bleus thrashed the Netherlands 4-0 at the end of August, but either side of that victory they suffered two disappointing results: Ola Toivonen’s last-minute strike brought Sweden a 2-1 win against the Euro 2016 runners-up, before Luxembourg secured a remarkable goalless draw at the Stade Municipal in Toulouse last month. Despite those setbacks, France remain in pole position to advance to Russia as winners of their segment, with Didier Deschamps’ charges holding a one-point advantage over second-placed Sweden and a four-point lead ahead of the Netherlands in third. Six points from their final two fixtures will be enough for the one-time world champions to finish at the summit of the standings in Group A, but a win and a draw may also be enough as they seek to make it through to their sixth successive World Cup finals.

France’s strength in depth is outstanding and they also possess a variety of different options right across the pitch, which allows them to switch between styles and systems between games. Deschamps is likely to opt for a 4-2-3-1 setup for Saturday’s clash, with Antoine Griezmann and Kylian Mbappe set to feature at the top of the pitch. Injured duo Paul Pogba and Ousmane Dembele are among the high-profile absentees, but the French can still call upon Blaise Matuidi, N’Golo Kante, Corentin Tilosso and Adrien Rabiot in the centre of the park and Thomas Lemar in forward areas. At the back, centre-halves Samuel Umtiti and Raphael Varane will provide a defensive shield in front of Tottenham Hotspur goalkeeper Hugo Lloris.

Bulgaria have given themselves a fighting chance of qualifying for Russia after amassing 12 points from their first eight fixtures in Group A. The Lions have not participated in a World Cup since the 1998 edition in France, when they were eliminated at the group stage four years after they made it all the way through to the semi-finals. Victories over Sweden and the Netherlands in Sofia were highly impressive and mean Bulgaria have arguably exceeded expectations in a tough group, but they have by no means had everything their own way: France brushed them aside in the return fixture, winning 4-1, while Sweden eased to victory in Solna by a margin of three goals to nil.

Petar Hubchev has used both 4-1-4-1 and 4-2-3-1 formations in recent matches, with the latter more likely on Saturday given that Bulgaria realistically need a win to keep their qualification hopes alive. Spartak Moscow attacker Ivelin Popov is the chief goal threat at the top of the pitch – although with just 12 goals in 70 international appearances, he is hardly prolific – but he could play in a slightly withdrawn role behind Spas Delev, while Georgi Kostadinov and Ivaylo Chochev will probably fill the two available spots in the centre of midfield. A back four of Strahil Popov, Bozhidar Chorbadzhiyski, Vasil Bozhikov and Petar Zanev, meanwhile, will be kept busy by France’s fearsome frontline.

This could be one of the most enjoyable encounters in European qualification this weekend; France are clearly favourites to come out on top, but Bulgaria’s excellent home record – they have won all four of their previous Group A matches – means this game is far from a foregone conclusion. Having said that, it would still be wise to back an away win at the Vasil Levski National Stadium, perhaps with both teams to score; another option worth considering is a France triumph with fewer than 2.5 goals netted in total.