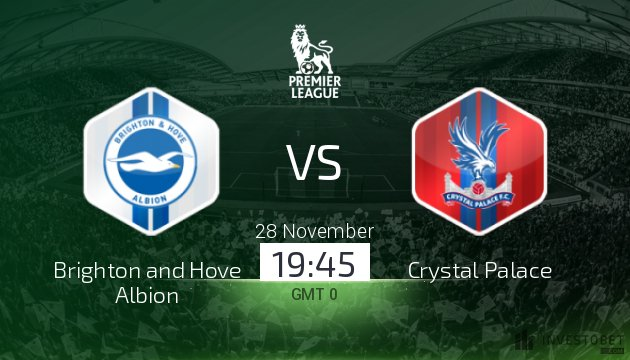 This is a rivalry that few outsiders fully understand but it’s a rivalry nonetheless, making this a fixture that really ought to be televised on a Saturday evening or Sunday afternoon, not shoehorned into a midweek programme and predictably overlooked by BT Sport.

Brighton and Crystal Palace have been the best of enemies since the late 1970s when they were managed by former Tottenham team-mates Alan Mullery and Terry Venables, two managers who chartered remarkably similar paths from the third tier to the top flight, twice clinching promotion side by side.

The hostilities began with an epic FA Cup tussle in the winter of 1976 that stretched across three matches, two postponements and ended in acrimony following a disputed re-taken penalty at Stamford Bridge. But this is only the fifth time in 28 seasons that the two clubs have occupied the same division, so the atmosphere is bound to be electric.

Wilfried Zaha was the hero on their last meeting in May 2013, shooting the Eagles to Wembley with a second-half brace in the Championship play-offs. Brighton had been strong favourites to prevail on the night but were shackled by some solid rearguard action from Ian Holloway’s men.

This will be Chris Hughton’s first taste of the rivalry, but the 58-year-old isn’t shying away from what this game means to the Amex faithful. And he understands that the onus is once again on Brighton to make the running and take the game to the south Londoners.

For many punters, that might be a core reason for siding with Palace and the draw. Roy Hodgson knows better than most how to set up a team with the primary function of being difficult to break down and hurting teams on the counter, while the last three visitors to Sussex - Everton, Southampton and Stoke - have all escaped with a point.

The Eagles are clearly heading in the right direction again, but their improvement as an attacking entity has arrived in spite of playing four key players out of position. Central midfielders James McArthur and Ruben Loftus-Cheek have been asked to occupy the flanks, while wingers Andros Townsend and Zaha have been deployed as strikers.

It’s an oddity that has caused opponents some confusion but we’re now reaching the stage where the subtleties of setup should be familiar because there’s no lack of video footage to consult. In the last-gasp 2-1 win over Stoke on Saturday, Palace barely threatened in the opening 45 minutes, prompting Hodgson to throw on an unfit Christian Benteke at the interval.

It's unclear whether Benteke starts this game or not, but it could ultimately boil down to a straight 4-4-2 versus 4-4-2, which would be a first for Palace. And given that scenario, Brighton boast pedigree in every position and look value to win their individual battles.

Both teams are in a good place and well-equipped to do themselves justice during the heavy schedule that follows, but the market appears to be straying too much towards Palace right now when Brighton have done little else wrong other than come up marginally short of their performance data.

The Seagulls are full value for their current position in the top half of the table, with Jose Mourinho labelling their performance against Manchester United on Saturday as the toughest challenge his side have faced at Old Trafford this season - although that might have primarily been a dig at Tottenham.

Either way, it’s hard to resist the 9/5 available on Brighton if the game proves to be high on emotion, and the tempo enhanced by a feverish 30,000-capcity crowd. Given the likelihood, we should be able to immediately distinguish which team has the benefit of home advantage, and the side who are bottom of the league should not be trading at shorter than 2/1.

Brighton to beat Crystal Palace at 9/5