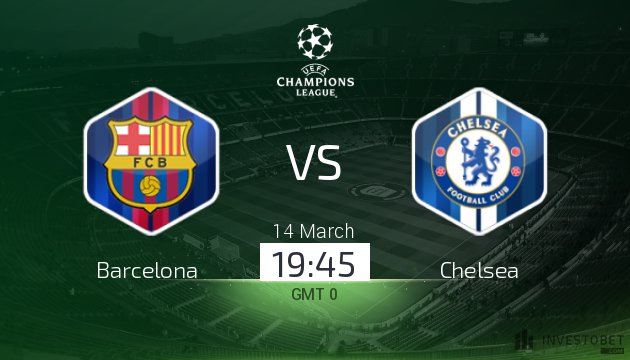 Barcelona and Chelsea will go head-to-head for a place in the last eight of the Champions League at the Camp Nou on Wednesday.

The first leg of this round of 16 clash ended with honours even, as Lionel Messi’s equaliser cancelled out Willian’s opener at Stamford Bridge. Chelsea approached the game with a specific game plan centred on ceding possession and breaking forward at speed, and their strategy almost brought them a famous triumph in front of their own fans. In the end, though, a mistake from Andreas Christensen allowed Barcelona to score what could be a vital away goal, with Chelsea now up against it as they prepare for the second leg. Antonio Conte and his players will look to draw heart from their performance against Barcelona last time out, but there have also been some low points for the club in the last few weeks – most notably a pitiful performance in a 1-0 loss to Manchester City which was far more comprehensive than the scoreline would appear to suggest.

When Neymar was sold to Paris Saint-Germain last summer, there was considerable concern about Barcelona’s prospects for the season ahead. Ernesto Valverde has done a magnificent job since then, however, with the Blaugrana on the verge of winning the domestic title – they are still unbeaten in La Liga and hold an eight-point advantage over Atletico Madrid in second place at the time of writing – and will fancy their chances of sealing a spot in the quarter-finals of Europe’s principal club competition. Barcelona did lack a spark at times at Stamford Bridge, but in Messi they possess the world’s best player and Valverde has done a fine job of providing the Argentinian with a platform on which to work his magic.

Barcelona will have to make do without Sergi Roberto (leg), Nelson Semedo (hamstring), Denis Suarez (groin), Philippe Coutinho (cup tied), Marc Cardona (thigh) and Sergi Samper (ankle), but Andres Iniesta should be available for selection following a slight hamstring issue, while Jordi Alba has successfully shaken off a knock and will start at left-back. Valverde is likely to stick with the 4-4-2 formation he employed against the Premier League champions in the first leg, with Messi afforded the license to roam around the pitch from his starting position alongside Luis Suarez. Samuel Umtiti and Gerard Pique will continue their partnership in the heart of the defence, with Sergio Busquets providing the protection in front of the back four.

Chelsea will be unable to call upon the services of Ross Barkley (hamstring) and David Luiz (ankle), but Conte otherwise has a fully fit squad at his disposal for one of his biggest games since assuming control in west London in the summer of 2016. The Blues boss will surely resist the temptation to field Eden Hazard as a false No.9 after the difficulties the Belgium international encountered when he was last deployed in that role in the loss to Manchester City. Alvaro Morata could begin the match up front with Hazard and Willian providing the support, while Pedro Rodriguez may be a more left-field choice to start as a central striker against his former club.

Barcelona are understandably heavy favourites to get the job done and progress to the quarter-finals of the Champions League, but a side coached by Conte should never be written off in a one-off contest. Chelsea will sit deep and look to frustrate the Catalans before springing forward on the counter-attack, and their fate could be determined by how clinical they are when they commit bodies forward in transition. Barcelona should have too much quality going the other way, though, which is why a wager on a home win with both teams to score could be worthwhile ahead of Wednesday’s encounter.