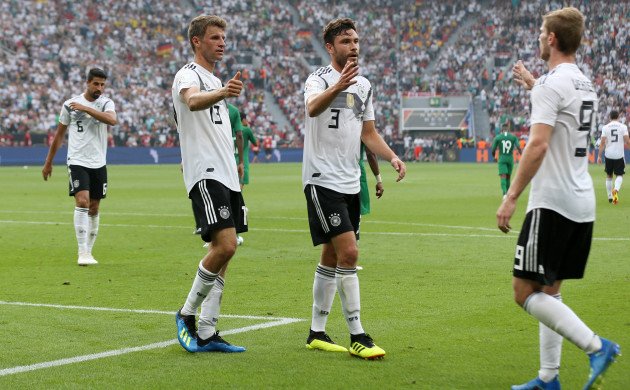 Normally the pre-tournament favourites before a ball is kicked, Germany are coming into this World Cup already looking pretty damn good. The leaving out of Leroy Sane might seem strange from the outside, but he’s not the same player for Germany as he is for Manchester City.

They arrive into this tournament with key players reinstated like Mesut Ozil, Thomas Muller, Mats Hummels, Jerome Boateng and Toni Kroos after winning the Confederations Cup in 2017 without any of them being present.

Experience and unbelievable quality. They are so thick in every position, and seem to have a total understanding of the role of every position in the team. Each player slots in without any issues, and should have no problems dispelling any problems as the tournament continues to progress.

None really - this is one of the most flawless squads at the tournament. The national side arrives into every tournament with a patchy friendly record, before dispelling any such doubts when the real thing kicks off and the trophy is up for grabs.

For us, it’s probably a case of who will make the biggest impact for themselves. Most of these players are already stars at major clubs, but Leon Goretzka – soon to move to Bayern Munich – will want to make an immediate impression on new coach Niko Kovac.

When people hear that Sweden are arriving at a World Cup without the legendary Zlatan Ibrahimovic, people assume they are going to struggle. However, they got here without him and should be more than capable of playing, for once, as a team.

The likes of Emil Forsberg have stepped out of his shadow, while they also have some very interesting players like Viktor Claesson and Ludwig Augustinsson. It’s hard to say what they will do at the tournament, but they have solid consistent players in their line-up and experience aplenty.

That experience will very much tell. Just three players have under 10 caps in the squad, two of them being back-up goalkeepers. The squad boasts six players with over 40 international caps, too, so they come to Russia knowing they have a team that can be relied upon to get a result or play in a specific way.

However, they are a bit goal-shy. Only two players in the squad have scored double figures in goals, and they are 31-year-olds Marcus Berg and Ola Toivonen. Both are hardly prolific, though are good players. If it comes down to goals scored, they may be in trouble.

The most interesting player to keep an eye for us would be John Guidetti. Long seen as the player to take the mantle from the likes of Henrik Larsson and Zlatan himself, Guidetti has scored just one in 20 games for Sweden. He’s a good player, though, and at 26 could make-or-break his international career.

South Korea are arguably the best of the Asian teams in Russia, with some very impressive and well known players in the squad. The performances of Son Heung-min will be essential, but he has more than enough star power to really make a big difference on the night for his country playing a very fluid system that relies on three defenders, South Korea don’t mess around when it comes to really putting on a show for the paying public.

They are hard to read, though, and find themselves unlikely to really make any major expectations back home.

They are quite a good side to watch, and generally want to go forward. They know their limits, too, which allows them to play to their strengths. The explosive style of Dijon player Kwon Chang-hoon gives them added unpredictability.

A lack of invention outside of Son and Ki Sung-yueng. This leaves the rest of the team reliant on their star duo, and when they cannot hit it off it can be hard for Korea to really make a telling impression on matches.

They are a team that lacks any kind of real stars outside of the aforementioned duo, Hee Chan-Hwang is definitely the one to watch. He was very good for Red Bull Salzburg this year as they cleaned up and reached a European semi-final; he might confirm his status as the next Korean rising star.

Always seen as a team that could threaten to achieve something, Mexico come into this World Cup with a really interesting line-up. They are loaded with some key veterans like Rafael Marquez and Andres Guadardo as well as all-time record scorer Javier Hernandez, backed up by Oribe Peralta.

However, they have some interesting younger players to keep an eye on, too, and employ an interesting offensive style. If they are to ever break their First Knockout Round hoodoo of the last few World Cups, it feels like this may be the year.

The days of waiting on some of their talents to finally make the grade are over. While Giovani dos Santos still players for the national side, he’s no longer the key cog that he once was. This means that they now pass the baton to some other younger players who seem to have taken this commitment to the test.

The age of many of their more reliable players might start to tell a couple of weeks in. A demanding group and a slightly creaking defence is sure to ask questions of Mexico here and might curb their progress.

For us, it’s got to be Hirving Lozano. The PSV forward is a real livewire, and has been one of the most interesting European debutants this year. If he continues to show what he can do in the World Cup, that move to a top-five league won’t be too far away.