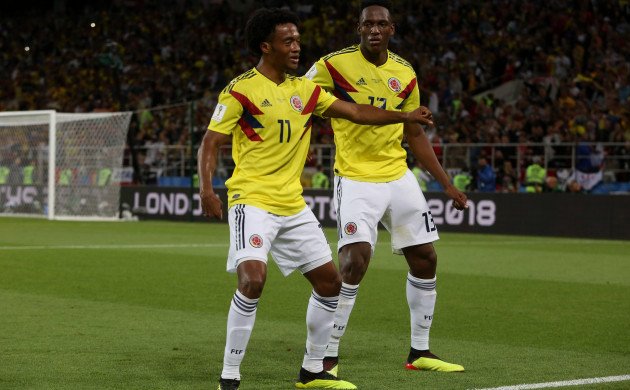 Will Colombia be the ninth nation to win the World Cup?

Uruguay were the first winners of the World Cup in 1930, and lifted the trophy once more twenty years later. Argentina also have two titles to their name, and Brazil, of course, have an unsurpassed five.

South America has not got its hands on the cup since 2002 – a 20-year gap by the time the next tournament comes around. The only other time the continent had to wait two decades for a lap of honour was between those two Uruguayan triumphs, when the Second World War got in the way. And had World Cups taken place in 1942 and 1946, the continent would have provided the favourites, especially Argentina, whose football was going through a golden age at the time.

But those favourites would not have included Colombia. Nowadays, Colombia is the South American nation most likely to join the traditional big three as World cup winners. They reached the quarter-finals in 2014, and may well have at least matched that achievement in Russia had star man James Rodriguez been fit.

Colombia has a number of advantages. Outside Brazil, it has the largest population in the continent – its current figure of 49.5 million is almost 5 million larger than Argentina. It also has a number of large cities – Bogota, Cali, Medellin and Barranquilla – making it less centralised than Argentina, whose football has historically been based around Buenos Aires. So why has it taken Colombia so long to emerge as a genuine world power?

The answer lies in the way that football took hold in South America. The sport was brought across the Atlantic by the British, and gained roots in those areas where the British had most investments – which meant the south cone, and specifically the cities of Buenos Aires in Argentina, Montevideo in Uruguay and Rio de Janeiro and Sao Paulo in south eastern Brazil. It was these three countries, plus Chile, who launched the first version of the Copa America in 1916.

Up at the other end of the continent, Colombia was much slower to take to the game. There were logistical problems, too. The country is full of regional differences, and was difficult to integrate until a nationwide air network came into existence. Colombia sat out the first 17 versions of the Copa America, between 1916 and 1942, before making their debut in 1945. A professional league did not get started until 1948. This week, on 15 August, marks the 70th anniversary of the opening game.

Football in Colombia, then, got out of the blocks much later than in the countries further south, where the game was already an important part of the national identity.

The league quickly received a helping hand. Argentina’s players went on strike. The Colombian league was not at this time affiliated to FIFA, meaning there was no obligation to pay transfer fees. The new Colombian league swooped and carried several disgruntled and high profile Argentines up north to the new league – including Alfredo Di Stefano, one of the greatest players in the history of the game. As well as Argentines, top Uruguayans and Peruvians, and even some England internationals, flocked to this new El Dorado league. For a few brief seasons, Colombia was playing host to some of the best football in the world.

Before long, terms had been agreed with FIFA and the players moved on – Di Stefano, of course, to Real Madrid, where he changed the course of football history, and possibly even of Spanish history as well. The quality of the Colombian league fell dramatically. But a seed had been planted.

A few decades later there was something of a repeat. These were the years when the drug cartels were running amok in Colombia. They got involved in football; they were fans, it was good public relations, and the game offered massive opportunities to launder their money.

Big-name foreign stars flowed in once more. America of Cali became a Latin American version of Real Madrid. But this time, with the game better established, there was a generation of homegrown players ready to shine alongside the expensive imports.

Built around the extravagant midfield talents of Carlos Valderrama, Colombia produced their first great side. That generation inspired today’s players – and with the likes of James Rodriguez, Juan Fernando Quintero, Davinson Sanchez and Yerry Mina all possibly in and around their peak, Colombia’s chances of putting up a challenge in 2022 should not be ruled out.

Outside Brazil, Argentina and Uruguay, Colombia are surely the most likely South American nation to get their hands on a World Cup. And when and if that day comes, 15 August 1948 can be seen as a vital step along the way.