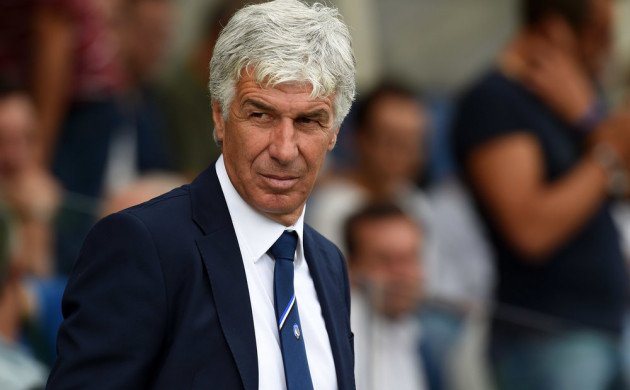 Will Atalanta boss Gasperini get another chance at a big Italian club?

"The squad, as it is, makes it hard to be competitive on all fronts," complained Gian Piero Gasperini. Just 72 hours of the transfer window remained in Italy. Little or no time for Atalanta to satisfy their less than impressed manager. "Unfortunately," Gasperini continued, "our window has been very sad and very meagre."

Breaking the club record to sign Duvan Zapata from Sampdoria had not gone unappreciated. But the other business or lack thereof left Gasperini worried. Atalanta had picked up a couple of kids from Inter, as well as top local prospects Marco Varnier and Marco Tumminello, and became the latest home of Mario Pasalic, the Croat midfielder who Chelsea move around without any apparent intention of developing for their own first team. Atalanta, for the record, are the fifth club he has joined on loan in a magical mystery tour of continental Europe.

Gasperini expected more. Bryan Cristante had been sold to Roma for €30m while Andrea Petagna, a striker Gasperini always seemed to have a soft spot for, was sent to SPAL along with Jasmin Kurtic. "The club knows what we need because I told them," Gasperini revealed. "They've got a decent budget available to them but so far all they've done is sign a load of kids who are still not ready."

Highlighting the budget was hardly a throwaway remark on Gasperini's part. He has made the club a fortune over the last two years, developing the likes of Mattia Caldara, Franck Kessie, Roberto Gagliardini, Andrea Conti and Cristante for huge profits. As such Gasperini understandably felt entitled to demand Atalanta be more aggressive in the transfer market and reinvest more of the proceeds. On deadline day, one more new face arrived. Atalanta signed Emiliano Rigoni, an Argentine winger who had impressed in the Europa League with Zenit St.Petersburg last season.

Whether his acquisition at a cost of €16m would alter Gasperini's perception of Atalanta's summer or not was still up for conjecture. Before the Dea's second Europa League preliminary against Hapoel Haifa, he said: "If the expectations are the same as the last two years, maybe they need a better manager." Identifying a better fit for the club though is simply impossible for Atalanta.

Monday's performance in Rome was proof of that. Gasperini made eight changes to the team that had drawn with Copenhagen in the most one-sided 0-0 in Atalanta history. Needless to say his team selection raised a few eyebrows. Atalanta were clearly prioritising qualification for the Europa League group stage, resting players for tonight's second leg in Denmark. Luis Palomino captained the side for the first time. Rigoni and Ali Adnan made their debuts, as did promising midfield duo Luca Valzania and Matteo Pessina in Serie A.

Roma took the lead almost immediately via a gorgeous Javier Pastore back-heel and, for a moment, it looked like Gasperini's doubts regarding Atalanta's squad depth and the criticism of the team he named was, in fact, well-founded. Alas that moment was fleeting. Pastore's goal was the exception, a beautiful aberration, in what turned out to be a perfect half of football from Atalanta.

The Dea's second string floored Roma, who trudged back to the dressing room at the interval 3-1 down. Atalanta had taken 16 shots, the most Roma have allowed in 45 minutes of football since Opta started collecting stats in Italy. Afterwards Eusebio Di Francesco said that if he could, he would have made seven or eight changes at half-time. A lot was made of how much sharper and fitter Atalanta are on account of starting the season earlier and already having five games in their legs.

Nevertheless the standard of performance Gasperini coaxed out of this new group and the speed with which he has got them to understand his methods and execute his ideas as if they have been at the club for years underlines the enriching quality of the coaching at Zingonia. Within four months of working at Atalanta, Gasperini's team was already being broken up and is now practically unrecognisable to the one he reached Europe with the first time around. But the club continues to punch above its weight and defy the laws of gravity, which is also a credit to its youth system and Atalanta's domestic and international scouting network.

While Gasperini's comments before the transfer window closed hinted at a growing disconnect with the hierarchy, the secret of Atalanta's success remains the synchronicity between the board, the coach, the recruitment staff and the academy directors. Everyone is on the same page and the result is a multiplier effect. While Roma came back into the game in the second half and ended up claiming a point, it was still hard not to marvel at the supremacy Atalanta achieved in the opening act of this two-part drama.

They went to the Olimpico without Josip Ilicic, Papu Gomez, Rafael Toloi, Marten de Roon, Remo Freuler and Andrea Masiello and were not only competitive but bitterly disappointed not to return home to Bergamo with maximum points from an encounter with last year's Champions League semi-finalists. Zapata pulverised Kostas Manolas and impressed with his part in the equaliser and Atalanta's second. Pasalic caused all sorts of problems between the lines and played a lovely one-two with Rigoni in the lead-up to his brace.

Afterwards, debate naturally turned to whether Gasperini should get another chance to coach a big club.  "I've been lucky enough to coach great players," he said, "Perotti, Palacio, Milito, Papu. When I went to Inter they were in great difficulty." A big club in name. But no longer in reality with a team at the end of the cycle and an owner fulfilled and looking for a way out. The management behind Gasperini and the project Inter had in mind, if there was any one to speak of, did not compare to what he now has at Atalanta.

In some respects, it is a shame because Gasperini merits the opportunity to work with the elite. But the fit with Atalanta is so perfect it would perhaps represent too great a risk to leave unless the structure in place were as joined up as the one he finds in Bergamo.

Tonight in Copenhagen, Gasperini finds himself under the bright lights again with a place in the Europa League group stages up for grabs. He has repeatedly shown he is comfortable on this stage. One wonders if he will get another chance to tread the boards of a bigger, more illustrious one in the future.