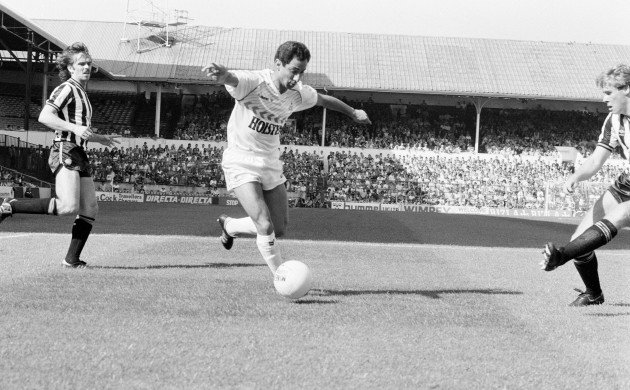 Saturday's FA Cup Final, with Willian on one side and Alexis Sanchez on the other, casts the mind back to the first South American involvement in this Wembley showpiece occasion of English football. Ossie Ardiles, his knees “all trembly” as the song put it, helped Tottenham beat Manchester City to land the trophy in 1981.

And three years before that – precisely four decades ago – came the event that changed the life of the little midfielder. On home ground, Ardiles was part of the Argentina side that won the 1978 World Cup.

Going into the tournament, Ardiles was hardly the popular choice. He played for Huracan, a relatively small Buenos Aires club. Meanwhile, the mighty River Plate had JJ Lopez, a midfielder of undoubted class. Indeed, Ardiles once told me that had he been the coach, he would have chosen Lopez ahead of himself.

But the man who was making the decisions was Cesar Menotti, and he saw things differently. Ardiles had a vital characteristic that tipped things in his balance. He was the more dynamic player – and that is what Menotti was seeking. The context explains the choice.

In the previous World Cup, Argentina - as well as Uruguay and Brazil - had been humiliated by the Dutch's Total Foobtall. Holland aimed to have as many players as possible involved in each and every phase of the play. They pressed without a pause. And to the South Americans, accustomed to having time on the ball, this came as a thoroughly unwelcome shock. Argentina were brushed aside 4-0, and developed a phobia about combatting the physical capacity of the northern Europeans.

This is the moment when Brazil and Argentina parted company in terms of method of play. In the next World Cup Brazil had a coach, Claudio Coutinho, who was so enchanted with the Dutch approach that he made an unsuccessful approach to copy it. Further down the line came the view that Brazil would have to bulk up, match the Europeans in physical terms in order for their extra technique to win the day. Brazil began the move towards counter-attacking football, reasoning that there would not be enough space on the field for an old style possession based game.

Menotti thought differently. His argument was that traditional Argentine football could still compete – as long as they upped the pace. There is an irony here. In his playing days Menotti was an elegant midfielder not known for his lung power. He would almost certainly not have picked himself, because his preference was for a hard-running team, and Ardiles was central to his plans.

First. Ardiles was not from Buenos Aires, the capital that dominates the country and its football. He was from Cordoba, which rivals Rosario, Menotti’s home, for the title of the second city. Menotti wanted a team that truly represented the nation, not just the capital.

More importantly. Ardiles was Mr Perpetual Motion. The team lined up with two wingers and a central striker, and a midfield trio with a firm division of labour. Americo Gallego was the holder, a tough tackling figure who rarely crossed the halfway line. Mario Kempes was the attacking bull, bursting from deep into the penalty area. And Ardiles was the man who linked it all together, fetching and carrying, running, passing, and then running and passing some more. Without him, the team would have been horribly disjointed. With him, they were world champions, beating Holland in the final.

The 1978 win has suffered from a credibility problem. There have been plenty of rumours surrounding the game against Peru. Argentine needed to win by a four-goal margin to reach the final. Some sources claim that the game was fixed as a result of a high-level conspiracy. Whatever went on, it seems clear that the Argentine players knew nothing about it. And it is clearer still that the triumph represents a before and after moment in the Argentine national team.

Up until 1978, Argentina had lost their place at the game’s top table. Their choice to stay out of the World Cups of 1950 and 54 had left them off the pace, as was cruelly exposed on their return in 1958. After that they were only competitive in 1966, when they reached the quarter-finals. But after 1978, even when they have fallen short of expectations, they have always been among the most feared forces at a World Cup.

That is true once again for Russia 2018, despite a very poor qualification campaign and some disastrous results in warm-up friendlies. But their chances next month would surely be better if they had a latter-day Ardiles to link up with Lionel Messi.