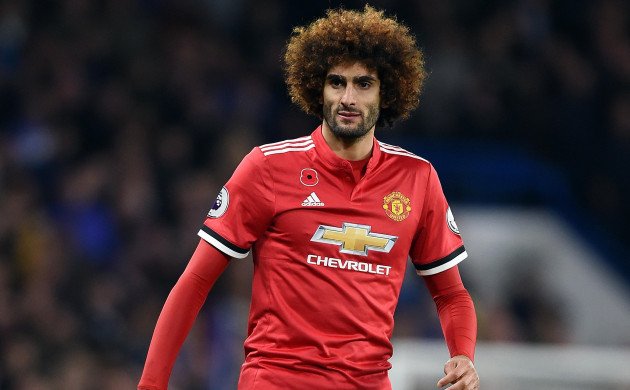 The biggest talking point at Wembley on Wednesday – other than Manchester United’s woeful performance against Tottenham Hotspur – was Jose Mourinho’s substitution of substitute Marouane Fellaini.

With United 2-0 down, Mourinho sent Fellaini on with the hope of getting a goal back and adding further height at the top of the pitch, with Romelu Lukaku hitherto totally isolated. He also wanted someone to get close to Christian Eriksen, who had run rings around the United players all evening.

However, after just seven minutes and immediately after Spurs came close to making it 3-0, Mourinho sent Marcus Rashford, who was set to come on, back to the bench. The manager instead signalled for Ander Herrera as his final substitute, with Fellaini making way – much to the surprise of everyone watching. Was the manager incensed with the midfielder for failing to close Eriksen down?

The Belgian has failed to extend his current contract with United and can leave for free in the summer. Mourinho has repeatedly spoken of his desire to convince the player to stay but, as yet, no deal has been done.

“He’s a very important player for me, he’s a great professional who is giving everything he can to help the team,” Mourinho said two days ago. “There is a desire from myself, the board and the player to stay together, that’s our objective. Are we going to reach, going to agree? I don’t know. What I know is myself, the board and the player would like to have a happy end.

“I know he wants to stay with us, he knows I want him and the club wants him but then there is a paper to sign. You only sign the paper when you are happy with what is in the paper so let’s see what happens.”

Supporters were quick to suggest that giving him a seven-minute cameo before hauling him off probably isn’t the best way to keep him happy. However, a closer look at the footage suggested Fellaini’s substitution was down to injury. Just 30 seconds after coming on to the pitch, the midfielder was seen limping and holding his left knee.

Fellaini has been carrying this injury since playing for Belgium at the beginning of October. He didn’t play for United for the month to follow and he has been struggling for fitness ever since. He then didn’t play any games in December and reports suggested the club were puzzled as to what was causing Fellaini pain.

Given how highly Mourinho rates Fellaini, his reaction to the injury makes sense. Footage showed Mourinho putting his arm around Fellaini before he went down the tunnel for treatment. After the game, the manager confirmed the injury and the player was later seen hobbling away from Wembley for the team coach.

It’s unknown at this stage how long the midfielder will be out for, but Mourinho will hope to not only get him back to full fitness as soon as possible, but also to convince him to commit his long-term future to the club.

The midfielder has still yet to win over all United fans, although his improved performances under Mourinho have seen him win more support. Yet given the fact rivals Manchester City have considerably outspent United in recent transfer windows, the fans would rather see the money go towards the salary of a new world-class midfielder, rather than prolonging the 30-year-old’s United career.