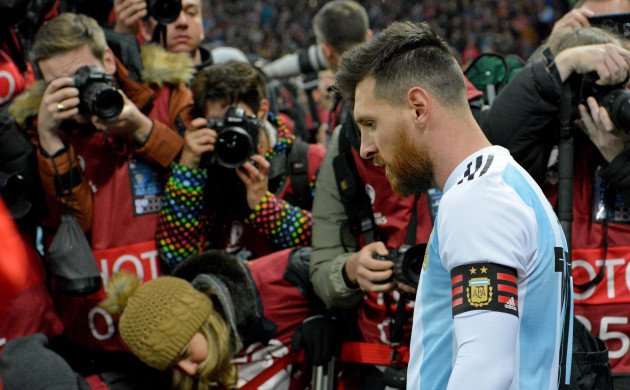 Argentina coach Jorge Sampaoli badly needed a boost. He received a huge one on Tuesday, and Saturday was not bad either.

Sampaoli was the national team’s third coach in a deeply troubled qualification campaign. As yet he has had little time together with his players, and it shows in some of the performances. A second-half collapse last November against Nigeria – World Cup opponents – turned a 2-0 lead into a 4-2 defeat. And last month his team was thrashed 6-1 by Spain.

The problems have been coming for a while. Once dominant at Under-20 level, Argentina’s recent youth sides have been weak. This has filtered through to the senior ranks, where there has been a glaring lack of quality newcomers in certain positions, especially in goal and all along the defensive line.

All of this has made the team absurdly dependent on Lionel Messi.  Without their star man, Argentina would not have got close to World Cup qualification; in ten rounds in which Messi played, Argentina acquired 21 points. In the eight he missed, they picked up just seven. He was the team’s top scorer with seven goals. No one else scored more than two.

But there is an obvious risk of Messi falling victim to the issue that has been the bane of recent World Cups: end-of-season burnout.

A blight on recent tournaments has been the undeniable fact that come the World Cup many of the best players are simply too tired and jaded to produce their best. One of the clearest examples of the phenomena comes from Argentina four years ago.

In qualification they were electric, with Messi, Sergio Aguero, Gonzalo Higuain and Angel Di Maria all firing together. Coach Alejandro Sabella was happy to play an open game, reasoning that in a tit-for-tat exchange his stars would outgun the opposition.

Come the World Cup, though, the equation had changed. The stars were not fit enough to shine. Aguero and Di Maria broke down.  And Messi was clearly rationing himself, playing in bursts. Sabella adjusted, Argentina dropped deep and defended and hoped that their main man could summon sufficient inspiration to get them through – and it was nearly enough to win the title.

This time, though, things are a little different. Firstly, Javier Mascherano is no longer the force of old in defensive midfield. For some time now, Argentina’s defence has been held together with a mixture of duck tape and Mascherano. But the old warrior no longer seems up to the task.

The other difference is that Sampaoli is not Sabella, a pragmatic coach happy to cut his cloth according to the measurements. The current boss would not want to take refuge in deep defence. He wants high tempo, high energy, attacking football. He needs a fit Messi.

In January Sampaoli went on a European tour, flying around to meet his players. The most important visit, of course, was to Barcelona.  “I spoke with Leo about his current form,” said the coach, “and about the importance of ensuring that there is not  repetition of what happened at the last World Cup, when he turned up for the tournament extremely exhausted.”

Sampaoli can wish all he likes for a rested Lionel Messi. The cluttered calendar of contemporary football has other ideas. Game after game, competition after competition – the clubs seek to extract top value for the fortune they pay to acquire the services of the top players.

Sampaoli, then, must hardly have been able to believe his luck last Tuesday. With a 4-1 lead from the first leg, Barcelona slumped to a 3-0 defeat by Roma and failed to make it through to the last four of the Champions League. There will be no more crunch games this season with the European title at stake. Indeed, there will be very few crunch games at all.

Barcelona have a healthy lead at the top of the Spanish first division, where they have not been beaten all season. Saturday’s game against third-placed Valencia was a lingering doubt. How would the team respond to the shock Champions League elimination? Might there be a wobble, piling pressure on the season run-in? In the event, Barcelona won 2-1, leaving them needing a maximum of three more victories to seal the title.

Messi, then, can put himself on cruise control. Russia 2018 will be his fourth World Cup – and the last he plays anywhere near his peak. The tournament may even bring an end to his international career. And the events of the last few days should help him to be fit enough to do himself justice. That comes as a much welcome boost for Argentina’s under pressure coach – and it is outstanding news for all those who love the World Cup.