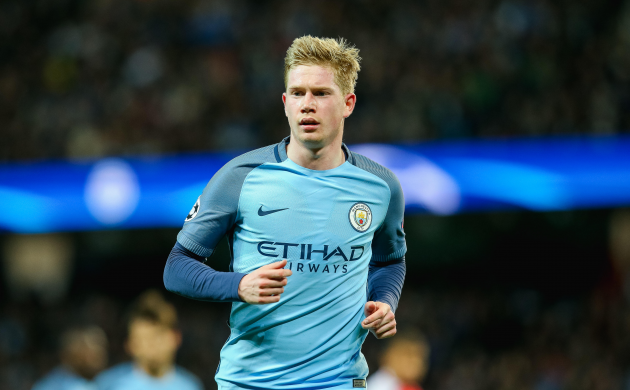 Manchester City often seem to exist in a vacuum. As a contending club, they receive a certain amount of coverage but, in general, that tends to be surface deep. Transfer stories percolate and Pep Guardiola attracts much curiosity, but the tone of the interest is slightly milder than its feverish equivalent at Manchester United, Arsenal or Chelsea.

As a case in point, the evaluation of their players is often different. City are well into their imperial phase now and have already spent almost a decade under Sheik Mansour's control, but the talent assembled at the Etihad Stadium has never quite been embraced as it should.

Yaya Toure is the quintessential example of that, given that his freakish dominance of midfields translated to minimal adulation beyond Manchester. David Silva – preposterously – is still under-appreciated for the player he is, and Sergio Aguero, the Premier League's apex predator for the last five years, exists in a world of his own, locked away from the fanatical discussion which typically surrounds Diego Costa, Wayne Rooney and whoever is playing at the tip of Arsene Wenger's formation.

Where, for instance, have the PFA or FWA nominations been? Even in City's two title-winning seasons, their players were overlooked for awards. It is not quite sinister enough to be termed a conspiracy, but it is still odd: the championship seasons in particular were full of excellent individual contributions that went unrecognised.

Now, it is the turn of Kevin De Bruyne and Leroy Sane to exist in that same shadow. De Bruyne is in his second season at the club and yet remains a background figure in the league. Chelsea may be the competition's outstanding team this year and, almost by default, Eden Hazard its premier attacking midfielder, but De Bruyne is the more complete player - one who is more exciting to watch, more frequently produces moments of magic and, would seem at least, to be a more natural neutral's favourite. But beyond fleeting references to his ability on Match of the Day or the occasional nod of approval from a British ex-pro pundit, is he ever truly celebrated?

It is so strange because he is so easy to enjoy. De Bruyne is a highlight-friendly footballer and the type of entertainment he provides does not require any scholastic understanding of the game. Enjoy his driving runs, watch his pure ball-striking ability; nobody needs to have read Inverting The Pyramid cover to cover to clap along to that.

Conveniently, there are also many parallels to Sane. The German arrived in England for a similar fee and from the same European league and, since becoming a regular part of Guardiola's side, has generally been a delight to watch. He retains some imperfections and there are aspects of his game which will develop and improve in time, but it is surely not possible to watch him play without being struck by the sense of novel brilliance.

Again, that is not even something which needs to be seen in person to be appreciated: Sane glides ethereally with the ball at his feet, draws opponents in and, already, uses the space he creates extremely well. He is not as established as De Bruyne (he has started just 13 Premier League games) and is not yet a match-winner of the same calibre, but his embryonic excellence also seems to be soundtracked by that familiar, curious apathy.

It is not an accusation of favouritism, but if Sane wore a different shirt - perhaps that of a club which has existed for longer at the game's summit - the temptation is to believe that not a day would pass without him being giddily praised. He is not English and so has no natural domestic intrigue, but that has hardly proved prohibitive in the past. Imagining what a young, exciting footballer could become is a game that never grows old, and yet it is one that the world does not really enjoy when the player dresses in sky blue.

De Bruyne and Sane are rockstars. They are not quite Page and Plant yet, nor Jagger and Richards, but they are at least Gillan and Blackmore; interesting and different enough to demand attention, but nevertheless playing to an audience of hundreds rather than millions.

But, for goodness' sake, it is Deep Purple.

Ultimately, the community's loss is Manchester City's gain. Not just, of course, because of what these two decadent talents will likely allow them to achieve, but because of the pure footballing qualities they represent. De Bruyne and Sane are attacking ambition, knifing dynamism, and – both together and individually – comprise as seductive a package of skills as exists in contemporary English football.