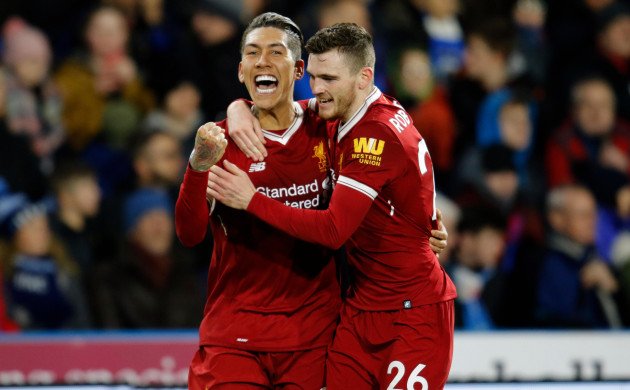 As this season has worn on, the gap between the teams in the top six has become ever more apparent. Man City are a huge margin ahead of vain chasers Liverpool, Manchester United and Tottenham, while Chelsea and Arsenal have dropped to the edge of the top-four race and far beyond respectively.

While City’s title burst was buoyed by their impeccable autumn run, the rest of the top-four race looks to have been heavily influenced by the post-Christmas run. Ten games have passed in that period and the differing form of the big six has had a huge influence on the table. At Christmas, Liverpool found Tottenham and Arsenal snapping at their heels a point behind them, while both United and Chelsea looked to have a useful cushion of eight and five points ahead of fifth and sixth place.

In the 10 games since, Liverpool have recorded the most points with 25, City have 24 and Tottenham 23. Should United beat Crystal Palace, they will have 20 points from that period, while Chelsea have picked up 14 and Arsenal just 11. Should we be surprised at how the league has shaped up since then? Not really.

If we look at the bigger picture, across the last two seasons, Man City, Liverpool and Tottenham have been the most consistent teams with regards to how they dominate their opposition via shots. Fluctuations in shot conversion will affect short-term outcomes, but reliable shooting patterns allow teams to profit in the long-term. In that respect, none of the three teams mentioned has had a 10-game spell in which they haven’t taken at least 50 more shots than their opponents.

By way of contrast, Chelsea spent much of their title season with underwhelming shot numbers, and oscillated above and below such a mark (while benefiting from spending huge amounts of time in winning positions). Earlier this season, they had a handful of weeks where they were only slightly edging their opponents. United have fluctuated hugely in the last two seasons. Last term they had all the shots but none of the conversion rates; this season the opposite has held. It’s powered them to what appears to be a comfortable Champions League qualifying position, but there have been spells where they have struggled to create good chance volumes, and only their defence has spared them. We don’t see them dominate readily, and Jose Mourinho’s stoicism appears ever more entrenched.

Lastly, Arsenal find themselves in yet another springtime lull, just as they did last season. On neither occasion could it be said that their poor results were a product of the vagaries of fortune; they simply lost their way and the backdrop of their shot profile has ended up looking more like a mid-table side than genuine top-four contenders. However, this time around the results in the first half of the campaign weren’t good enough to bolster a dip in form, and the cumulative effect is that they’re a mile away.

The long-term impact of this is that the big six are becoming split into two obvious camps. The upward trajectory is firmly on the side of the three clubs who have shown the best form both long-term and since Christmas.

Manchester City are in year two of Pep Guardiola’s tenure, but have made huge strides year to year in refining their play stylistically, with the benefit of having made the right transfers in areas of weakness. Liverpool have given long-term commitment to Jürgen Klopp and year three of his reign has been the most stable and thrilling yet. The transition from top-four challengers to near top-four certainties has been subtle but definite and their ability to make the right transfers for their style and with the best chance of succeeding is paralleled perhaps only by City.

Lastly, Tottenham are in year four of Mauricio Pochettino, and what they have lacked in recent transfer nous they have made up for in sheer consistency, with this now the third season that they have broadly put up similar numbers, got similar results. The top four once more beckons. Their problem may be how to move upwards from there, but as long as they keep landing in the Champions League slots, incremental progress via consistency is possible. Three clubs all with clear strengths in different aspects of planning and strong results across a long period of time. Each has a strong core of stars and a slew of players on the cusp of their peak or who are already enjoying it.

Their current form means that each will also be a threat in the Champions League, with the traditional European giants hoping avoid City and Liverpool in particular. The key here is that their blend of aggression off the ball and fluidity on it makes them difficult for any team to play against. Witness reigning Premier League champions Chelsea barely touching the ball at the Etihad on Sunday and recording just three shots all.

Of course, small margins can decide matters at the business end of the Champions League, and nothing is guaranteed. Yet there is the very real prospect that we are on the brink of a golden age for English football in which the riches of the Premier League are backed up by results on the pitch.

City lead the way and others can follow, and those who slip off the back in the short-term are more than wealthy enough to pay to find solutions next season and beyond. Stability, planning and a clear ethos has improved the top of the Premier League; now these clubs just have to translate that into European success.