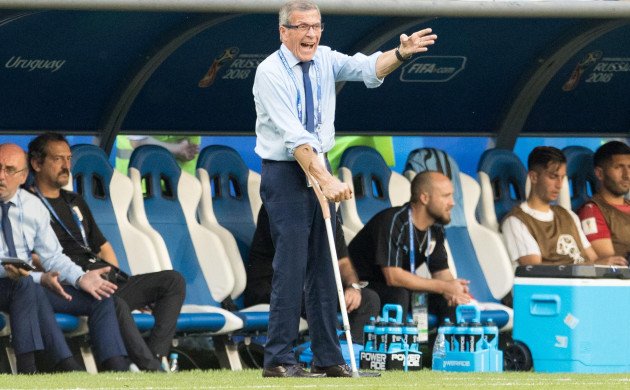 Last year Nacional of Uruguay travelled to meet Botafogo of Brazil hoping to win a place in the quarter-finals of the Copa Libertadores, South America’s Champions League. Their quest was not a successful one. Within the first few minutes they had let in two goals, and the tie was effectively over as a contest. There was, though, one point of interest: how many of the Uruguayans would get themselves sent off?

In the end the answer was two. It was all so predictable. The cult of machismo in Uruguayan football almost demanded that players pick up a red card. But these days, such behaviour is rarely seen from the national team.

In many ways, Uruguay is a candidate to be the most civilised nation in South America, with, for example, the best income distribution. But the country has acquired a reputation for brutality on the football field.

The roots of this are easy to trace. Uruguay were the first kings of the global game. They did not even lose a World Cup match until their 1954 semi-final against the great Hungarians went into extra time. But as football caught on all over the world, it became impossible for such a small nation (population some 3.3 million) to maintain its prominence. As the old phrase goes, other countries have their history, but Uruguay has its football. Losing, then, really felt like a national disgrace, and humiliation was to be avoided by fair means – or by foul.

This will to win, or willingness to resort to high jinks and low tricks, became incorporated in the country’s footballing culture. Uruguay failed to make it to the 2006 World Cup. In qualification they suffered a heavy defeat by Colombia. Coach Jorge Fossati thought he had identified the problem – a lack of traditional resilient spirit meant that the team had not picked up enough yellow cards.

Thankfully, Oscar Washington Tabarez sees things differently.  The veteran coach took charge for his second spell with Uruguay in 2006. A highly educated man – he is a qualified teacher – he had been thinking long and hard about the difficulties of competing in a contemporary globalised environment. And rather than cheap rallying calls, he put his faith in planning, in using the national youth sides to identity and develop players with the speed of movement, thought and technical execution to thrive in modern football.

These youngsters would also be educated as footballers and as citizens. They would be given an intense course in the history and importance of the sky blue shirt. In short, the Tabarez project was filled with humanistic values as well as footballing ones.

And so the veteran coach is not only proud of leading Uruguay back to the top table of world football. He is also proud of Fair Play awards his team have acquired along the way.

A quick story to illustrate the point. Early last season, Tabarez phoned young striker Maxi Gomez, part of the squad in this World Cup and the man seen as the successor to Luis Suarez and Edinson Cavani. Gomez was enjoying a fine campaign in Spain with Celta Vigo, and Tabarez congratulated him on a recent run of goals – but also warned him that he was picking up too many yellow cards. Gomez replied that a senior member of the Uruguay team had already rung him and passed on exactly the same message. Tabarez and his players seem to be singing from the same song sheet.

And so, four games into the World Cup, Uruguay have picked up just one booking – awarded to midfielder Rodrigo Bentancur against Russia. They got through a rearguard action against the Portuguese on Saturday without receiving a single card. The figure is likely to rise in this Friday’s match against France. Dealing with the pace of the French attack will not be easy, and the objective, after all, is to win.

Nevertheless, Tabarez and his current crop of players are giving the lie to the view that anyone in a Uruguay shirt should kick first and answer questions later. They are showing that a little nation can be competitive without setting out to break the rules.