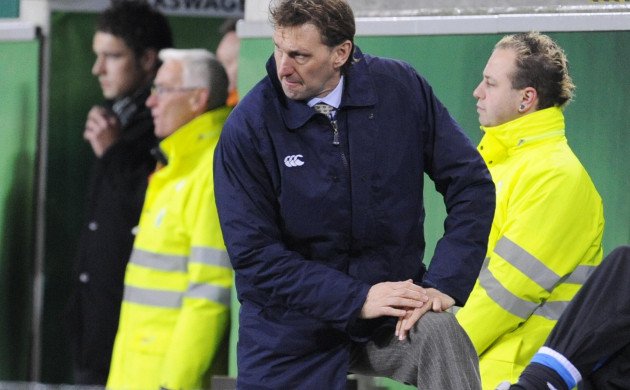 Unpacking the hypocrisy of Tony Adams' appointment at Granada

Tony Adams is a curious fellow. He speaks in that rather offbeat way and his facial expressions can sometimes seem to belong to a different conversation altogether.

Maybe it is something exaggerated by the banality which surrounds him? Suspicion of the media has created an atmosphere in which it pays to say as little as possible, scorching the earth in order that only the driest platitudes can remain. Within that context, Adams is oddly expressive. His eyes twinkle with chaos and his sentences dance to their own peculiar rhythm.

On Tuesday, of course, he became the interim manager of Granada. The Spanish side lost 3-1 to Valencia at the weekend, leaving them seven points from La Liga safety with seven games left to play. The week before, the former Arsenal captain – who has been working in a coaching capacity at Estadio Nuevo Los Cármenes since November – was appointed sporting director.

So it actually makes sense: with Granada likely already doomed, promoting someone from inside the organisation at (presumably) minimal expense appears a logical step. It may admittedly be odd to think of Adams as someone who “knows his way around” an Andalusian football club, but that is nevertheless the case. He presumably enjoys an oversight of the existing squad and has had a high vantage point of their various failings. Equally, most managers do not voluntarily add a relegation to their CV, so alternatives were probably few and far between for owner Jiang Lizhang. Adams is also Lizhang’s long-term employee and vice-executive of his football management company, so who better to help him pick up the post-Pozzo family pieces?

"I'm going to try and keep the ball out of one end and stick it in the other."

Imagine if this was happening in England. Consider what the reaction might be if Tony was actually Antonio and Granada was in Humberside. Foreign managers arriving in Britain tend to be quite reserved. If they do not come replete with a set of inarguable credentials, their entry to the Premier League is soundtracked by the heavy bass of snark and scorn.

Their employment, as we all know, is typically presented as a broad rejection of all domestic alternatives. It is understandable, then, that most of these coaches – the most recent example being Hull’s Marco Silva, of course – choose a quiet introduction, preferring instead to let their subsequent progress do the talking and to have their retaliatory laughs in private and from afar.

But not Adams. His introductory press-conference was conducted in loud, slow English, in accordance with the enduring cliché.

"With my years of experience, I come here to give the players a kick up the backside. And to win the next seven games."

It is interesting. Adams may not be entirely typical of his culture, but in this instance he is representative of one of the major differences between British footballing personalities and those from every other part of the world. A foreign coach in England will generally tiptoe into the league, almost apologise for being there in the first place, and spend his early months working to earn some kind of acceptance. By contrast, the Englishman is all garish clothing and bold statements.

If you were in the mood for tenuous arguments, you might say that this has its root in the traditional role of British coaches abroad. Once upon a time, the FA dispatched missionaries to almost every part of the world with the aim of growing the sport. It is a practice that is now a century in the past – and Adams is nobody’s idea of a Mister – but part of that nation-building spirit apparently lives on.

Running, working, honesty; these are the British coach’s gold, frankincense and myrrh – concepts which have presumably existed beyond the Dover cliffs for some time now, but which nevertheless form the basis of our contemporary offering.

Adams’ reference to his own experience betrays that further. He has, as he says, spent nearly 40 years playing the game, first as an amateur and then as a professional, but few parts of his career qualify him for the position he now occupies. Yet, as further exhibited by the ceaseless “do you understand the Premier League” choirs back home, that never seems to be too much of a consideration. Domestic football is erroneously perceived as a hub of ultimate learning, a place where through sheer exposure it is apparently possible to prepare for every conceivable challenge.

This is a strange attitude, especially given that almost every technical progression experienced by modern English football has been driven by an imported influence. We take our ideas from the outside – from Wenger, from Mourinho, from Conte – and yet our appetite to preach remains as strong as ever.

Adams is quirky rather than dislikeable and, from the perspective of his life’s journey, it would be rather charming to watch him succeed in such an unlikely location. But nothing in his past suggests that is likely – not his time at Wycombe and certainly not his ill-fated stint in charge of Portsmouth. The fragments of coaching experience he has collected away from England demonstrate little more than the possession of an inquisitive mind and an adventurous spirit.

Ironically, he actually represents the reductive caricature painted of every non-English, non-Champions League winning coach who dares to seek employment in this country. Adams is the mythical bogeyman that Merson, Thompson and every other footballing border-guard protects us from each and every night.