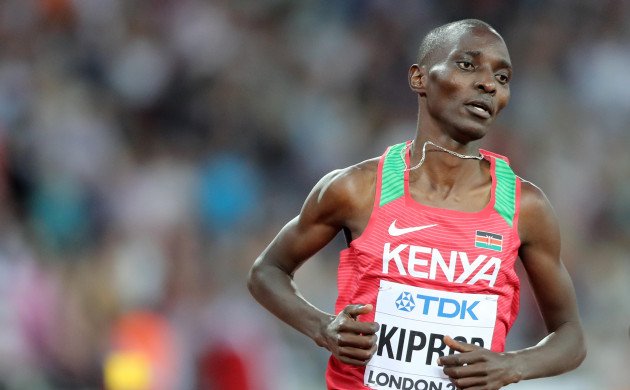 With Asbel Kiprop, the Olympic champion from Beijing 2008 and three-time world champion, embroiled in a doping scandal, the recent trend of turmoil in middle-distance running seems set to continue.

The IAAF’s recent rule change concerning hyperandrogenic athletes, which is scheduled to come into effect from November 2018, has garnered plenty of media attention around the world in the last few weeks. Now it seems that it is the turn of the men’s events to experience major change and controversy.

Kiprop’s failed drug test has led to some wild allegations. In a statement the athlete claimed his positive test is a fraud perpetrated by doping control officers of the Athletics Integrity Unit (AIU), which was set up by the IAAF as an independent body to oversee the sport’s doping tests.

Kiprop claims that the reason behind his positive test is that an officer of the AIU fraudulently tampered with his sample, because the officer in question felt Kiprop had not paid him enough for providing him with 24-hour advance warning of the test. Kiprop also claims he has proof of a payment made to the doping control officer.

The AIU has admitted that protocol was breached by the officer offering the athlete advance warning of the intention to collect a sample.

The breach of protocol is made worse by the fact that a handful of foreign athletes who have been tested in Kenya claim they also received prior warnings of tests.

Kiprop seems mortified by the failed drug test, telling news agency Reuters: “the achievements I made are crumbling before my own eyes for a crime that I have not committed.”

Although Kiprop’s statement offers no proof that his sample has been sabotaged, his implication that he would have skipped the test due to the prior warning is not illogical given that there was a chance of the test being positive for EPO. More light will likely be shed on this going forward, with Kiprop set for a day in court. Modern scientific techniques such as DNA analysis will probably provide some answers regarding the veracity of the allegations.

While the brightest star of the men’s 1500 and one-mile race of the last 10 years is engulfed in doping controversy, two of the brightest young prospects are busy making their mark.

The day before on May 3, the 17-year-old Jakob Ingebrigtsen – the double European Junior Champion from 2017 and younger brother of two European champions, Henrik Ingebrigtsen and Filip Inbgebrigtsen – decisively defeated a field containing 2016 Olympic Champion Matthew Centrowitz Jr. and other world-class athletes.

A post-race interview can been seen here:

Mathis Brorstad is a gambling expert and freelance writer who specializes in, athletics, various winter sports and gambling related topics. He has worked in the online gaming industry the last 15 years.