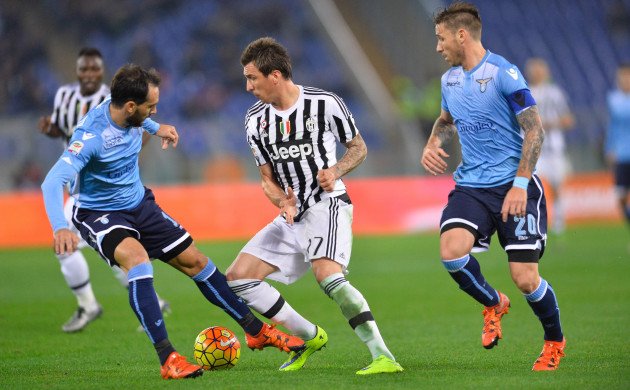 Third wheel? Why Mario Mandzukic is actually the engine that powers Juventus' attack

Cruising towards a sixth straight Serie A title and arguably the strongest side remaining in the Champions League at the semi-final stage, Massimiliano Allegri’s Juventus are flying. Their talent-rich squad, led by defensive stalwarts Leonardo Bonucci and Giorgio Chiellini, and fired to win after win by Argentinian forwards Paulo Dybala and Gonzalo Higuaín, is perhaps the most balanced and deep on the continent.

These are the names, alongside Miralem Pjanić, Alex Sandro and Gianluigi Buffon, that will be spoken of reverently if the Bianconeri are able to end their 21-year Champions League drought and secure a historic treble in the coming weeks. But the role Croatian striker Mario Mandžukić has played in making Juventus one of the most feared sides in Europe should not be understated.

The former Bayern Munich and Atlético Madrid targetman has been far from prolific in front of goal this term, finding the net just six times in 30 Serie A appearances. However, the evolution of his role within the team has seen his selfless, and often unheralded, work rate and positional discipline help broker a potent strike partnership between Dybala and Higuaín.

The expensively acquired Argentinian duo were probably always going to click at some stage, with Dybala as a trequartista and Higuaín as a very typical No.9. But up until the Old Lady’s defeat by Fiorentina on 15 January, the pair had only combined for three goals.

Then came Allegri’s decision to ditch his tried and trusted 3-5-2 and 4-3-3 shapes in favour of a 4-2-3-1 system which allowed Higuaín to lead the line alone, with Dybala dropping into the No.10 role where he could more readily find space away from the watchful eye of opposing defenders. One of the most unusual facets of the new formation was that Mandžukić, an out-and-out striker not known for his mobility, was being asked to operate on the left flank.

Yet the switch proved to be inspired. Playing as a defensive winger, Mandžukić has diligently pressed the opposition’s backline so Higuaín does not have to, and tracked runners to support the adventurous Alex Sandro at full-back.

Furthermore, his aerial prowess has been re-appropriated on the wing, offering an outlet for Bonucci to ping his trademark raking, diagonal passes out from the back. Mandžukić, as a kind of false targetman, stretches play and pulls the opposition not only into deep central areas but also out wide, which in turn makes it much easier for both Higuaín and Dybala to find space in their designated zones.

Mandžukić leads the Bianconeri when it comes to successful aerial duels per 90 minutes (3.3), while he has also made an impressive 1.1 interceptions, 1.4 tackles and 1.2 key passes per 90. With supreme humility, he has expertly taken to his new tasks, all of which are designed to make life easier for his more gifted team-mates.

Since that 2-1 loss to Fiorentina, Juventus are unbeaten. Dybala has scored 11 goals and registered four assists in that time, more than doubling his return from the first five months of the campaign (eight goals and two assists). And two of those assists have been for Higuaín goals.

Higuaín was already scoring frequently before the reverse to La Viola – he even bagged Juve’s only goal in that game. But he has been even more prolific since the tactical switch, netting 13 times in 22 games. Perhaps more tellingly, though, the former Real Madrid and Napoli striker has registered his only two assists of the campaign in this period, one of which was for Dybala.

All of this is not to say that Mandžukić is a mere battering ram. It is something of a cliché that strikers are often the best crossers because they know exactly where they would want the ball to be played were they attacking it, but that certainly seems to be true of the Croatia international, as evidenced by his pinpoint cutback for Dybala to score his second goal of the game in last month’s 3-0 Champions League quarter-final first-leg triumph over Barcelona.

Mandžukić still knows where the net is, too, as his sumptuous finish against Genoa in April proved; the chances may not fall his way as regularly in his new position, but he has not forgotten how to dispatch them when they do. At first glance, Mandžukić may appear to be the third wheel in Juventus’ attacking triumvirate, but look a little closer and it becomes clear that he is actually the engine which powers it.