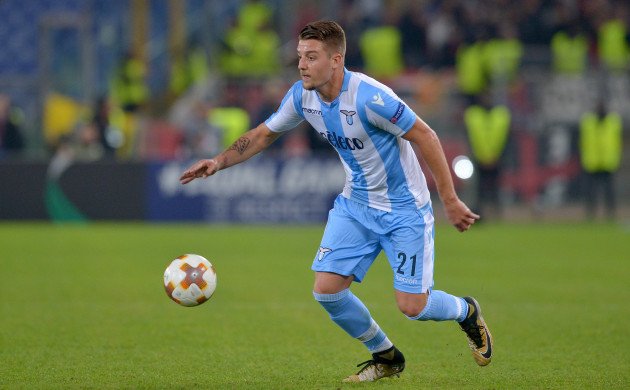 Considering the sporting stock he comes from – his father, Nikola Milinković, a former footballer, and his mother, Milana Savić, a professional basketball player – it's no surprise that Lazio midfielder Sergej Milinković-Savić parlayed his genetic advantage into a high-level athletic career.

A shade under 6ft 4in with wiry strength, the 22-year-old has the build of a budding basketballer. But it is his subtlety of touch, grace of movement and on-field intelligence that sets the Stadio Olimipco star apart as one of football’s hottest prospects. Combining his physical and technical gifts, throwing in an already refined temperament and blossoming leadership skills, it is easy to see why Milinković-Savić is arguably the most sought-after and valuable under-23 midfielder in the world right now.

Born in Lleida, Spain, where his father was contracted in the mid-1990s, Milinković-Savić grew up in Serbia – the country he represents at international level – but found his first big break in football with Genk in Belgium. Snapped up from Serbian side Vojvodina in June 2014, the young midfielder quickly established himself as a first-team regular, impressing travelling scouts.

After a just a year in Belgium, Lazio forked out £16m to sign Milinković-Savić. Yet again the midfield prodigy adapted quickly to his new surroundings, his influence steadily growing to the point where now, at 22, he's a talismanic force in the middle of the park for Simone Inzaghi’s men.

It has been a similar tale of rapid assimilation at every juncture on the international stage, too. In 2013, he starred for Serbia as they were crowned European under-19 champions, and was voted the third-best player of the tournament at the FIFA U-20 World Cup two years later. After a senior bow in 2017, Milinković-Savić is set to be a key player for Serbia at the upcoming World Cup in Russia.

Reportedly the subject of a summer bid from Liverpool and with Manchester United and Paris Saint-Germain said to be circling, it is testament to Milinković-Savić’s enormous potential that would-be suitors have not been put off by his ever-increasing price tag, most recently set at around the €100m mark.

That would be a lot of money to fork out for a still-developing youngster, but in Milinković-Savić you get an awful lot of attributes. At home in a box-to-box midfield role, the Serbian star can do it all: his height makes him a powerful aerial presence at both ends, while he’s diligent in his defensive duties, quick-thinking in transition and remarkably creative in the attacking third.

But it is with the ball at his feet that Milinković-Savić’s true value and staggering potential is demonstrated. Possessing every attribute desired of an elite player in his role, the Serbian is as robust as his is technical, as responsible as he is creative.

In the attacking third, Milinković-Savić can be devastating as scorer or creator. The above image, taken from a Serbia Under-21 appearance against Slovakia, shows how smartly the midfielder is able to manufacture space for himself in a tight area. Closed down by two defenders, the Lazio man cleverly rolls his foot over the ball to outfox the onrushing opponents.

Then, on his weaker side, without hesitation, he unleashes an unstoppable 20-yard strike into the top corner, showing how quickly and adeptly he is able to exploit even the smallest of openings when in sight of goal.

Although he only has one Serie A assist to his name so far this season, Milinković-Savić is a gifted and regular creator of chances for colleagues, producing 1.6 key passes per 90. His cumulative expected assists (xA) for the term of 2.38 broadly means the quality of chances he has created has not been matched by the receiving players’ finishing.

Key to Milinković-Savić’s creativity is his quick-thinking and propensity for playing with his head up, always scanning the field to identify the movement of his team-mates. This time, we see the 22-year-old pick up the ball in midfield and instantly spot the arced run of striker Ciro Immobile.

He then picks out the Italian international hotshot with a sublime, outside-of-the-boot pass, splitting the Torino defence and putting Immobile through on goal. Tellingly, after beating the goalkeeper, the centre-forward immediately looked for Milinković-Savić when celebrating, acknowledging the youngster’s fantastic assist.

Here, taken from a recent last-gasp 2-1 win away to Sampdoria, having dragged his side back into the game with a goal from close range, Milinković-Savić lays on the winner, more through intelligence and anticipation than any flashy technique. Picking up the ball 30 yards from goal, the former Genk man drives forward before moving along the edge of the penalty area, from left to right.

Then, just when the entire Sampdoria defence begins to shift over to his side, he sends a reverse pass toward the back post, catching the opposition’s backline flat-footed. It is only the fact that the goalkeeper saves the initial effort before the follow-up is scored that denies Milinković-Savić the credit of an assist on this occasion.

In the middle third, Milinković-Savić’s talent shines brightest when he is pressured. As pressing becomes increasingly key to the tactical approach of the game’s elite coaches, being able to negate pressure becomes a more valuable asset.

With his ability to utilise his long frame to shield the ball, his individual skill to roll away from pressure and his vision and technique to locate an open colleague, Milinković-Savić’s press resistance is perhaps the most impressive aspect of his vast skill-set.

Here, from the same game versus Sampdoria, Milinković-Savić is put under pressure by the Genoese side’s talented defensive midfielder Lucas Torreira. The tenacious Uruguayan quickly applies pressure to the Lazio No.21, hoping to nick possession.

But the big Serbian simply turns into space and, with his head up, surveying his options, he picks out a team-mate in open acreage, thus not only protecting possession but driving his side forward as he does so.

This time we see Milinković-Savić wonderfully combine his press resistance and ability to protect the ball with his vision, creativity and technique. Closed down by two Sampdoria players on the edge of his own penalty area, he elegantly swerves inside, leaving his adversaries bamboozled, facing the wrong way and wondering where the Lazio midfielder went. 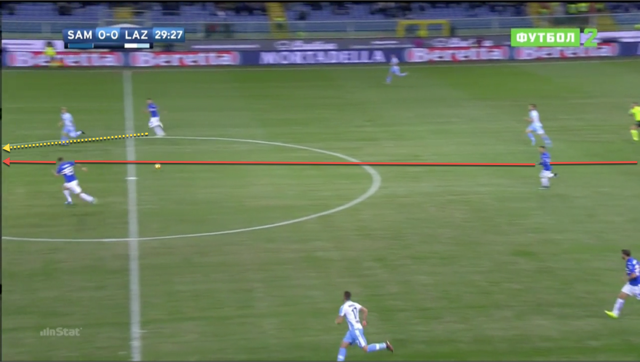 His first thought is then focused on taking his side up the pitch. Spotting Immobile on the move near the halfway line, Milinković-Savić audaciously bisects the Sampdoria defence with a stunning, driven 40-yard pass to send the former Torino and Borussia Dortmund striker racing through on goal.

In short, there isn’t much Milinković-Savić cannot do. And at 22 he’s only getting better, more refined, working on the stamina that is perhaps the last remaining chink in his armour.

“I am not thinking about leaving Lazio, because I am currently very happy in Rome,” He recently told Novosti. “It means a lot to have Vanja close to me. We support and strive to motivate each other. We play in one of the strongest leagues in Europe and we’re proud for each other.”