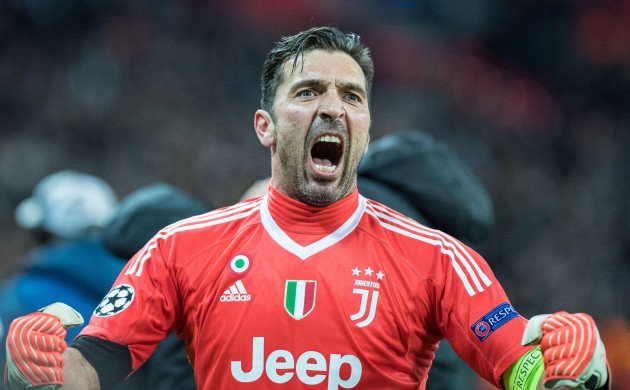 Wednesday night at Wembley could have been Gianluigi Buffon’s last ever appearance in the Champions League. Juventus were determined for it not to be. Giorgio Chiellini got in the way of more of less everything Spurs threw at Buffon’s goal in the second half. And when he wasn’t on hand, Andrea Barzagli was. His last-minute goal-line clearance stopped Tottenham from taking the tie to extra-time.

Juventus live to fight another day in this glorious competition. Buffon led his team-mates to the away end at the final whistle, running and jumping before the travelling support to a huge roar. It was a moment to savour for the veteran. A famous night at one of the game’s great arenas. Who knows how many more he will get to experience.

Retirement is planned for the end of the season and while the “demon” on Gigi’s shoulder continues to leave him conflicted about the decision, the next 18 games (which include a hypothetical run to the Champions League final) are likely to be his last. He had hoped to go to a record-breaking sixth World Cup but walked away from the national team after Italy’s defeat by Sweden in the play-offs. The door has been left ajar for a comeback, though.

“I know better than anyone that I could get in the way of the development of other goalkeepers and I don’t want that,” Buffon told Der Spiegel. It's a sentiment he has reiterated over and over again. But then it's also true that the sense of duty Buffon feels towards his country is so strong, he’d always heed its call. “If there was need of a goalkeeper and they did call, I’d always pick up even in my 80s.”

Italy’s interim coach Gigi Di Biagio has taken Buffon at his word. Part of it feels sentimental. At a training camp in February, he put it like this: “Gigi can’t end on the Sweden game. It’s a question of his personal story [with the national team], a question of prestige, of what Gigi has given our game.”

Heart ruling the head perhaps. Only Di Biagio had recently watched Buffon mark his return to action after a two-month injury lay-off by saving a penalty in the first leg of Juventus’ Coppa Italia semi-final against Atalanta. He was in the stands at the Artemio Franchi when Buffon came to the rescue, sliding in on Cyril Thereau to deny Fiorentina a goal.  Which is why this case must be treated differently to that of Francesco Totti a year ago. Buffon, at 40, is still decisive.

There have been mistakes this season. We can talk about the goals Spurs scored over both legs. But in Italy, Juventus have conceded just the one in 17 games and naturally their captain is owed much of the credit given he was in goal for half of them. It’s one of the reasons why the little voice inside Buffon’s head would be justified in making the case for him to put off hanging his gloves up and continue.

“There’s nothing more to add,” he said when told of Di Biagio’s comments. “Other than that I have a sense of responsibility and attachment that makes me feel I still have something to give to the national team in this moment of transition. There’s a delicate series of friendlies coming up. I had thought about going on holiday for a few days but when the national team needs you, you have to answer the call and not desert. Then from June onwards I will take another look at it. It’s a form of devotion and responsibility to Italy.”

The friendlies Buffon alludes to - both of which count towards Italy’s co-efficient - are against England and Argentina. A return to Wembley is on the cards, then. Except it's being reported that Buffon is uncomfortable with the position he's been put in. For all the noises he was making about la Nazionale, he never asked for this. The statements he made underlined the love he has for his country. They weren’t a come-and-get-me plea.

The debate it has engendered has apparently led Buffon to consider politely declining Di Biagio’s offer. The last thing he wants is the division decisions like these can cause, particularly at a time when what the Italian football ‘movement’ needs most is unity. Quizzed on his plans before Wednesday’s game against Spurs, Buffon evidently does not want it to all be about him. Quite the opposite. Side must always come before self. What matters to him at the moment is Juventus reaching their objectives. The rest can wait.

A Kobe Bryant style farewell tour does not appeal to him. “I could never do that,” he told Gazzetta in January. “Even celebrating my own birthday bothers me as I know I will be the centre of attention and I don’t like it.” Buffon’s intention is to do right by everyone. He isn’t chasing Paolo Maldini’s Serie A appearance record. And if the tears he cried after the Sweden game is the last image of his Italy career, so be it. “They won’t change the opinion I have of my career.”

Despite feeling conflicted about calling it a day - and why wouldn’t you after nights like Wednesday - Buffon still seems more accepting of it than some of his other colleagues when they reached the same age. The friendship he has with Juventus president Andrea Agnelli is so strong that Buffon will respect the club’s wishes if they feel it’s time for Szczesny to succeed him next season.

“The president has been extraordinary with me,” Buffon revealed. “For five years he has repeated the same thing to me: 'At certain a point of the season, come and tell me if you want to carry on or not…' Buffon added: "I will never be a problem, I will always be there for those who have given me such a lot, Juve or the national team, in any guise or role.”

Agnelli has made a pact with Buffon. If Juventus win the Champions League this season, he wants him in goal for the European Super Cup and Club World Cup. You don’t need to be a Juventus fan to want to see that happen.