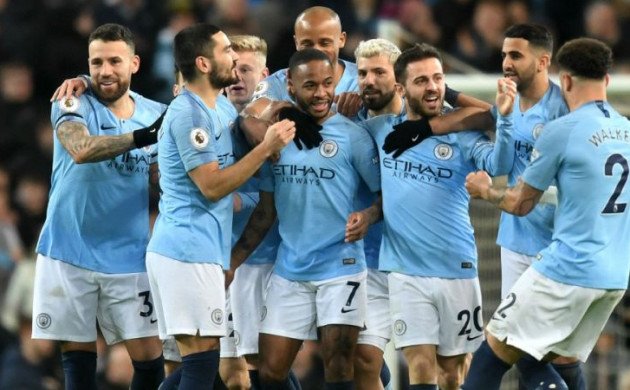 There was an element of good fortune to Manchester City’s first goal on Saturday evening. The Premier League champions did not just rely upon a ricochet which saw the ball cannon off Raheem Sterling’s leg and into the net, but also on a controversial refereeing decision in their favour. Sterling was in an offside position from Sergio Aguero’s flick, and while Watford defender Daryl Janmaat may have got the first touch, the City winger was surely interfering with play given that his opponent was trying to prevent him reaching the ball.

Watford had every right to feel hard done by, particularly as they had succeeded in containing and stifling the league leaders in the opening half at the Etihad Stadium. That goal forced Javi Gracia’s charges to step higher up the pitch and take more risks, and the match was put beyond them when Sterling scored his and City’s second four minutes after his first. It may have been a simple finish from close-range at the back post after Riyad Mahrez drove the ball across the box, but it is no coincidence that Sterling finds himself in such positions on a regular basis.

The England international completed his hat-trick just short of the hour mark, collecting David Silva’s pass and beating two Watford defenders before slotting the ball past the reach of goalkeeper Ben Foster. Those three goals took him up to 15 for the season in the Premier League and 18 in all competitions, which puts him on track to eclipse his previous best of 23 in a campaign from 2017/18. He has also provided nine assists in the top flight – a tally bettered by only Eden Hazard and Ryan Fraser.

Given his influence this term, it is easy to see why Sterling is one of the favourites to win the PFA and FWA Player of the Year awards. Virgil van Dijk is another obvious contender given the impact he has had at Liverpool, but such prizes tend to go to attacking players and there are few of those in the division with a stronger claim than Sterling.

“It’s a massive win, it was difficult in the first half to break them down, they were compact and solid," Sterling told BBC Sport after the match.

"We got the slight luck we needed and kept going and pressing. In my head I am hoping and praying. I was hoping my goal didn’t get cancelled out. We got it and it kick-started our game. I don’t think I was offside but I don’t know what the issue was, I was just happy to see it count.

“Every game is a final but we focus on our next game which is the Champions League," he added, turning his attention towards his team’s pursuit of an unprecedented quadruple ahead of Tuesday’s clash with Schalke at the Etihad.

"We relax and take our time. All we can do is focus on ourselves, but let’s hope we can get a bit of luck as well.”