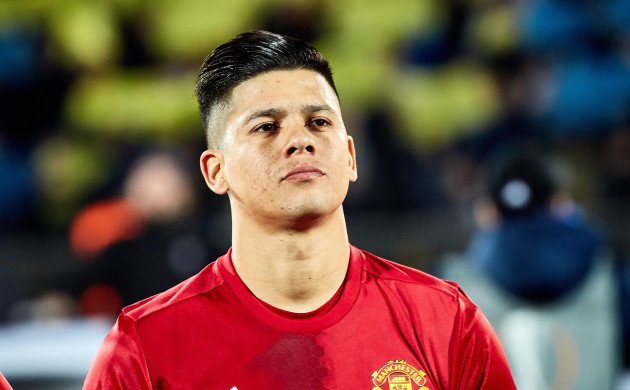 Rojo has Manchester United fans on his side, but is his time at Old Trafford approaching an end?

Marcos Rojo could be a very popular player among Manchester United fans, but time is running out for him to realise his potential at the club.

Bought in the summer of 2014 by Louis van Gaal, the defender has struggled to hold down a regular place in the starting XI. More recently this has been due to injuries rather than form, but as he approaches his 28th birthday and the end of his fourth full season at the club, it’s time for him to stake his claim.
Rojo immediately sought out a bond with the supporters, coining the phrase “Rojo is red” on his social media platforms - in reference to the colour of his new team and the translation of his name, which means 'red' in Spanish.
United fans have been drawn to passionate Argentinians in the past, but they have tended to get their fingers burnt. Gabriel Heinze was a hugely popular figure in the stands, with supporters chanting “Argentina!” every time he put in a meaty challenge. But his time at United ended with him trying to take the club to court over a desired move to Liverpool, having lost his starting place to Patrice Evra.
The fans were hurt by this and his admission years later that he had made a mistake did little to appease them.
"I don't have many regrets from my career as a footballer, but that episode with [Sir Alex] Ferguson [has] to be one of them," he said in 2011. "I'm impulsive and strong-willed and this has got me into trouble at times, which was the case when I left United. I spent three years in Manchester and had some great moments and I regret it [leaving the club] a lot. I took the decision and, looking back, I regret it because it meant leaving a great club and their supporters.
"I was aware of the rivalry, I knew the risk of going from Manchester to Liverpool and what it means. I hope it doesn't tarnish the way they [the supporters] see me and they will remember the three years I had in the team.”

The next Argentinian to burn his bridges with United fans was Carlos Tevez. He spent two seasons at the club, winning two Premier League titles, the Champions League and the League Cup. Yet when United failed to meet the asking price to turn his loan into a permanent transfer, he swapped the red of United for the blue of rivals Manchester City.
The striker didn’t have a rosy time there either, going on strike and refusing to play for several months, but his decision to hold up a banner which read ‘RIP Fergie’ after winning the league in 2012 didn’t go down well with the fans of his former club.
Manchester City released a statement apologising, while Tevez backtracked. "I got carried away in the excitement of the moment and I certainly didn't mean any disrespect to Sir Alex Ferguson, who I admire as a man and a manager," he said.
By the time compatriot Rojo came on the scene, the fans were wary. His performances on the pitch didn’t help matters either. Van Gaal largely used him as a left-back where Rojo struggled to make his mark. While he can play there, and has done regularly for the national team, he didn’t play well in that position for United.
However, Rojo managed to form a great partnership with Phil Jones under Jose Mourinho and was first choice for months before his cruciate ligament injury in April. Mourinho admires his ability to play through the pain threshold, while the supporters enjoy seeing a player flying into tackles.
The defender has slowly been making his way back to fitness, playing in several games since coming back from his lengthy lay-off, but he's yet to have a consistent period of playing time such as the one he enjoyed last season.
“I feel my thinking in the next few years must be to try to stay as long as I can and to be here at one of the biggest clubs you can be at," Rojo said recently. "My family is really happy to be here and I am also very pleased to be here. It’s great and I’m very happy here. At first, it’s true it was difficult but it always is difficult getting used to a new city. Now, I’ve found a love for the city. My daughters are very happy here. My eldest daughter is at school at the moment so, when I come in to train and work hard, I get home and knowing my wife and daughters are happy contributes to your general feeling.”
Having already won the FA Cup, League Cup and Europa League, Rojo now has his eyes set on a bigger prize.
"The challenge in the next few years is to win the Premier League,” he said. “I don’t want to leave England without winning the title.”
Rojo has yet to prove whether he has the quality to be first choice in a team challenging for the league, but he certainly has the right attitude and the fans are in his corner. Chris Smalling may well be on his way in the summer, but Rojo is a defender who Mourinho may choose to keep around for a while longer yet.