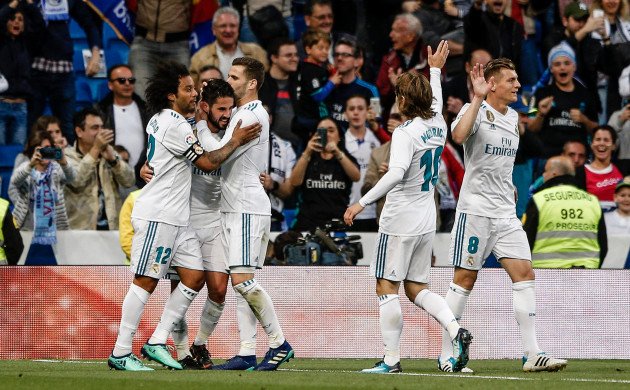 Real Madrid may have struggled, but honest Zidane’s group have the knack for success

Zinedine Zidane knows where his responsibilities end and where his players must take up the slack. There is nothing pretty about the season that Real Madrid have had, with this weekend’s Champions League final the last chance for Los Blancos to save face and make some incredible history in the process.

Were it not for his unprecedented success in Europe since taking over at the Santiago Bernabeu, Zidane would probably have fallen victim to the managerial guillotine months ago. An embarrassing defeat over two legs by Leganés saw his side eliminated from the Copa del Rey, with an inconsistent domestic campaign seeing another Madrid-based rival, Atlético, take second place.

“I may not be the best tactician, but I have other qualities,” Zidane admitted in his pre-final press conference this week. The Frenchman has his particular set of skills and knows what he can be trusted to get out of his players. In an era of micro-management, extensive analysis and endless tactics talk, he puts more weight on the personal touch.

“Motivation and passion are values that I have, and that is worth a lot more. I do not believe I am not strong tactically, because you do that for me. You can win things sometimes if the dressing room is not good. But to win consistently they must get on well, and this dressing room is like that, very good, very united, they work well,” Zidane explained.

Winning consistently is something his Real Madrid side have managed to do under his guidance. Saturday is their chance to lift the Champions League trophy for the third season running. By retaining a core of players in the dressing room and cropping off any potentially toxic elements with each summer that has passed, there is no doubt that his group has the attitude and mentality required to tip the balance in Kiev.

Zidane’s concession that he relies more on the mental, man-management side of the game makes it harder to predict how Madrid will approach Saturday's showdown with Liverpool. There is a rough consistency to how they play, with los Blancos utilising either a 4-3-1-2 system with a creative player in the hole, or hard-working, pacy wide players in a 4-2-4. The edge and winning mentality is the one constant that is guaranteed in the Champions League.

Real Madrid have won just one of their last five fixtures heading into their last competitive clash of the season, and throughout April, November and January they also suffered some stuttering form in domestic action. After lifting the league title, scoring freely and approaching their task with merciless consistency last season, it was plain to see where Zidane’s approach can fall flat.

A league season is a tough ask; it demands for complete focus and a level of motivation that is hard to retain across 38 matchdays, especially off the back of a successful campaign. When there are off-days and your coach admits tactics aren’t his strongest suit, there is nothing to pull the group out of the hole.

Floodlit European nights, however, allow for the camaraderie to paper over the cracks and for Zidane’s top-level playing expertise to mean that little bit more. Not only has he been there before, but he has trusted this same group of players in exactly the same circumstances. His view that silverware can be won when the dressing room isn’t good shows what the allure of a trophy and success can do in the short-term.

Real Madrid don’t have that problem. They have the knowledge of the rollercoaster of emotions that they will encounter on Saturday evening. They have gone through the preparation, the planning and the matchday experience before, and although it counts for little when the first whistle blows in Kiev, this group knows and understands what to expect from one another when the stakes are at their highest.

Fail to win and there are few reasons as to why Real Madrid wouldn’t want to reshuffle things at a managerial level to find a candidate who can offer a more even keel across both league and European affairs.

Lift the Champions League trophy for the third time in a row, though, and it is very unlikely that Zidane’s name will be usurped in the history books any time soon - not bad for a coach who knows his limitations and readily embraces them. Zidane may not be the man to refresh a generation or build a new Real Madrid, but he is the man to get the most out of this group on the most important of nights.