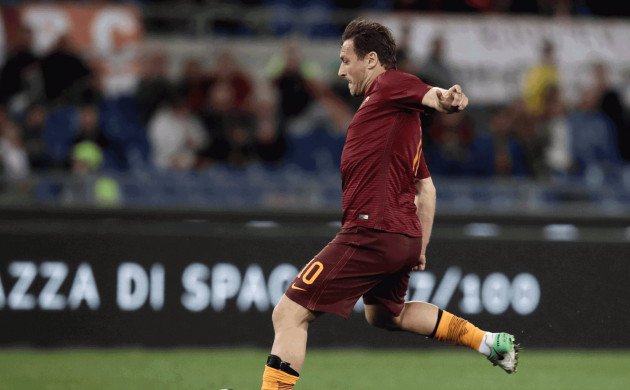 Probable final Rome derby ends in defeat, but Totti's status as a Serie A legend is assured

There would be no dream finish for Francesco Totti.

Introduced in the 73rd minute of Sunday’s clash with arch-enemies Lazio, Roma supporters were hoping that their veteran captain could spark a comeback from 2-1 down in what looked likely to be his final appearance in a Rome derby. Totti has had a significant influence on plenty of prior meetings with his side’s cross-city rivals, and here was a chance to both damage Lazio’s Champions League ambitions and keep alive his own employers’ slim title hopes.

But it was not to be: the 40-year-old was unable to inspire a turnaround in the closing stages at the Stadio Olimpico, with Keita Balde Diao wrapping up the victory for Simone Inzaghi’s men with five minutes of normal time left to play. The 3-1 triumph moved Lazio three points clear of fifth place, although Napoli’s defeat of Inter on Sunday night means their top-three hopes are hanging by a thread ahead of gameweek 35; Roma, meanwhile, missed the chance to make up ground on league leaders Juventus, who drew 2-2 with Atalanta on Friday evening.

Totti’s pursuit of a second Serie A winner’s medal will therefore end in failure, unless the former Italy international opts to extend his playing contract by 12 months to give himself another chance of adding to the Scudetto he helped Roma attain in 2001. His current deal expires at the end of June and, although there has not yet been any official announcement on what will come next, it seems probable that Totti will hang up his boots and take up a role as a director. Indeed, club president James Pallotta has already confirmed that there is a six-year contract on the table should the long-serving forward decide to move upstairs, with Totti himself having ruled out a future as a manager.

This season has been a difficult one for the man nicknamed the ‘King of Rome’. Totti has just started just a single match in Serie A – a 4-0 success against Crotone in September – while his 14 appearances off the bench have totalled just 231 minutes, an average of 16.5 per outing. The fine form of Edin Dzeko up front and Radja Nainggolan as a No.10 has limited his opportunities, although Totti – while publicly supportive of manager Luciano Spalletti – has not always been entirely accepting of his diminished role despite his advancing years.

“I still feel like a player who is physically in good shape and I want to play,” he told RAI in February. “The injury is behind me now and if I don’t play it is purely down to a tactical decision. I can’t stay at Roma like this. It hurts to be on the bench. I understand at my age that I play less, but ending my career like this is bad for me as a man and what I have given to Roma. I demand more respect for all I have done here.”

He may have become a more peripheral figure this term, but Totti’s status as a bona fide Serie A legend is already assured. Only Paolo Maldini has featured in as many top-flight seasons in Italy as the Roma man (25), while Silvio Piola is the only player who can beat his tally of 250 goals in the division, and only Maldini (647) and Gianluigi Buffon (617) have made more appearances than his 616. Totti may have comparatively little to show for it in terms of collective honours – just one league title and two Coppa Italias – but even that is part of the allure, with the 2006 World Cup winner having resisted the overtures of several bigger and richer European clubs over the years.

It is difficult to imagine a Roma without Totti, but that may soon become a reality. While the 40-year-old will always be associated with his boyhood club and could be an important figure off the field as early as next season, it will not quite be the same when he is no longer part of the Giallorossi’s squad list. Roma fans, at least, will always have the countless memories he has given them.