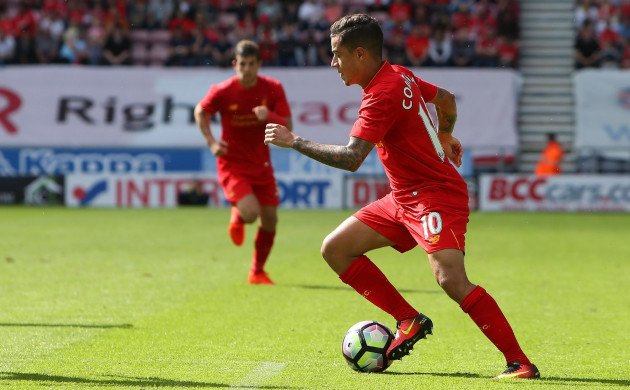 Barcelona’s courtship of Philippe Coutinho is beginning to resemble Real Madrid’s efforts to sign Cristiano Ronaldo almost a decade ago.

Los Blancos pursued the Portuguese goal-getter well over a year before actually landing the Manchester United man in a then-world-record £80m deal in the summer of 2009. The transfer took on an heir of inevitability; Ronaldo’s arrival at the Santiago Bernabeu had long felt like a question of when rather than if.

In many ways, that same sense of certainty surrounds Coutinho’s potential switch from Anfield to the Camp Nou. Whether it is Neymar hinting that he would love to link up with his international colleague at club level or the constant reports of an imminent big-money summer deal, you would have to be brave to bet against the Liverpool playmaker someday calling Catalonia home.

One of the most logical reasons to question the feasibility of Coutinho joining Barcelona, however, is that, with Lionel Messi, Luis Suárez, and Neymar forming one of the most potent attacking tridents the game has ever known, there is no obvious gap in the Blaugrana’s line-up for the former Inter attacker to slot into.

Yet the recent tactical experimentation of manager Luis Enrique, as well as the need to identify a suitable heir to Andrés Iniesta, has opened up two possible scenarios in which Coutinho could solve a problem that contributed to Barcelona’s failure to win the La Liga title this campaign.

Luis Enrique will not be in charge next season, but whoever takes over from the former Camp Nou favorite may want to consider revisiting his decision to employ a 3-3-1-3 formation. The tactical switch did not always yield positive results, but the system did provide plenty of food for thought.

The main benefit of the 3-3-1-3 was that it allowed Messi to move into a central starting position, something he has been gravitating towards for a year or more. The Argentinian’s presence as a true No.10 means his otherworldly gifts can be sought out more readily without sacrificing width – which is what happens when he is stationed on the right and cuts inside.

Coutinho could, therefore, line up on the right flank, with Neymar left, Suárez central and Messi scheming in behind. From there, the Liverpool man would have access to the attacking zones in which he is so effective, while his work rate and willingness to chip in defensively would benefit the balance of the esoteric configuration.

However, if the new coach decides to stick with Barça’s traditional 4-3-3 formation, Coutinho’s recent performances for Liverpool suggest that he could be a viable long-term replacement for Iniesta as an interior on the left of the Blaugrana’s midfield three.

There is no doubting Iniesta’s immense quality and status as one of the greatest midfielders of his generation. But at 33, the time has come for Barcelona to figure out a succession plan and manage the World Cup winner’s workload as they did with Xavi in his final seasons with the club. Iniesta will still have a key role to play next season, but he will be a less frequent starter. Indeed, injuries have limited the playmaker to just 10 La Liga starts this term, and his mooted replacement, André Gomes, has flattered to deceive.

Lining up in a deeper midfield role during the final weeks of 2016/17, Coutinho has excelled. Reds boss Jürgen Klopp moved the Brazilian into the midfield three for the Merseysiders’ trip to West Ham in their penultimate fixture of the campaign, and the Brazilian responded with one of his best performances of the year, scoring twice and registering an assist in a 4-0 win. He then assumed the same role against Middlesbrough on Sunday, when as well as scoring he put in a typically creative and dynamic display to help his side secure a top-four finish.

In those two games, the 24-year-old made a total of seven key passes, completed nine dribbles and picked out a team-mate with 89.45 per cent of his passes. The most interesting of Coutinho’s statistics for this period, though, is his average of 81.5 passes per game, a figure which demonstrates his willingness and ability to get on the ball and orchestrate proceedings from deeper in the field. Iniesta, by way of comparison, has averaged 76.6 total passes and 1.7 key passes per 90 minutes this season.

Stepping into Iniesta’s shoes is not the most obvious way for Coutinho to fit in should he move to Barcelona, but there is a reason to believe he could be a revelation in the role. Liverpool’s qualification for the Champions League means it will be difficult and expensive for the Catalans to acquire him this summer, but Coutinho could prove priceless for the La Liga outfit’s new boss.