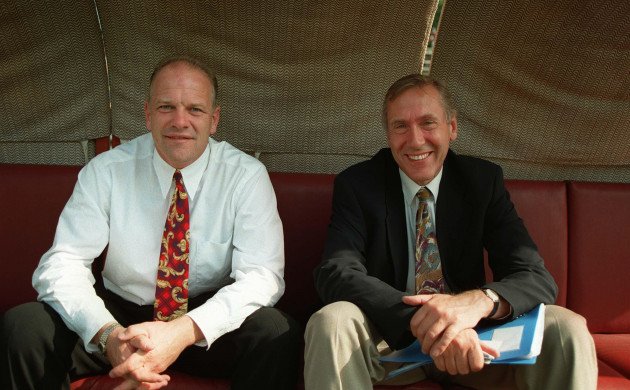 Perhaps Andy Gray has a point - is football becoming too analytical?

Quoting Andy Gray is an awkward place to begin an article. Because of the unpleasantness which ended his time at Sky, Gray is a pariah. He and Richard Keys may be keen to stress how happy they are working for beIN in Doha, but it’s a thin act. The weather might be nice and the lifestyle agreeable, but you suspect that in their spare time Keys and Gray still run down to the beach to spell out SOS messages in the sand.

Nevertheless, while the circumstances which dictated Gray’s exile make him a lesser person, he isn't any less of an authority about the game he covers. For better or worse, he essentially created the template for Sky Sports’ brand of analysis and, in an interview conducted by The Set Pieces, has been having his say on his contemporary equivalents.

As you might expect, he’s not entirely complimentary. He’s generous in his praise for Gary Neville, still enjoys the work of Davie Provan and Andy Townsend, but professes himself to be frustrated by the modern analyst’s over-focus.

“I think we’ve gone too far from just analysing the game to analysing everything about the game.”

The reader’s mentality when approaching interviews with people like Gray is always the same. They want to skim a few lines, find a quote which best represents their feelings towards that person, and then spend the rest of the day sharing the mirth across social media. In truth, Gray’s interview presents a couple of opportunities for just that, straying dangerously close to - and sometimes into - Proper Football Man territory. Like a lot of men of his age, he clearly believes that things were better in his day. Not a crime in itself, of course, but very much what you might expect him to say.

Beyond the obvious issue, Gray and Keys have a clear PR problem. The Doha tourism board stuff rankles, certainly, but it’s background noise compared with their continued, straight-faced insistence that all of this - the Premier League, the players, the standard of football in this country as a whole - probably wouldn’t exist without them. They are the founding fathers, we are the ungrateful beneficiaries: eventually, history will remember them properly. It’s fanciful - and it’s that same self-regard which helps to perpetuate a natural aversion towards them.

Here’s an awkward truth, though (and, yes, you do hate yourself for acknowledging it): Gray has a point - modern analysis has become very self-serving and probably is over-intellectualised. There’s certainly too much emphasis on refereeing decisions and, yes, too much time is spent trying to assign blame for everything that happens across a weekend.

At his most useful, Gray imparted knowledge. His co-commentary did occasionally become irritating and, in hindsight, does now sound over-sugared with melodrama, but he was able to explain the game in a simple way - to people who, perhaps, weren’t willing to spend the small hours on social media and who didn’t brandish tactical neologisms in an effort to patronise.

It’s an embellishment, of course, but it’s a quote which does capture the changing winds. Football fans have always had an appetite to learn and discover - to be led beyond the game’s curtain - and that manifested in criticism for programs such as Match Of The Day and in vitriol aimed at the “turn up and talk” merchants who still haunt the live broadcasters’ studios. It was entirely fair; much of that programming was - and remains - unjustifiably idle.

Beyond the mainstream, though, those complaints have perhaps been taken too much to heart. Football is complex and it does have many more strategic layers than the average passer-by assumes, but the aims now - at least within the internet’s more informal pockets - seem to all be powered by self-interest. Not, crucially, to inform those who engage with their work, but to demonstrate a level of understanding which places them above their peers.

The discussion and chronology of shapes, systems and formations does (and should always) have a place within the game. However, there exists a stratosphere of pseudoscience above that which doesn’t serve the same purpose and which certainly doesn’t appear to have the interests of the average match-going supporter at heart.

It’s the climate of the Philipp Lahm passing triangle diagram, a land pocked with laboured references to mediocentros, and a place in which joy and enthusiasm - tenets of the game - are hacked at and belittled. It’s a preference and a taste, so there’s no motion to outlaw here, but those who take issue with it certainly have a case.

No, Gray is not the right prop with which to make that point and, in any case, his interview was aimed at what he sees on television rather than anything he may have encountered within the snobbish enclaves of Twitter or YouTube. However, he remains synonymous with a particular attitude towards football - all big drama, pyrotechnics, and goals - and worked as an analyst when deference to the minutiae wasn’t an implied necessity.

During a time, perhaps, before simple, joyful digestion of the game became such a faux pas.