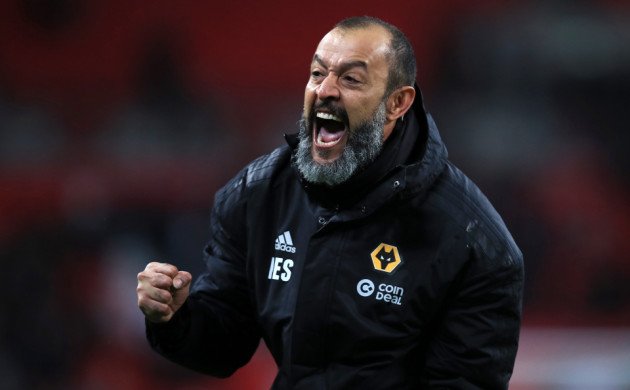 It was a marvellous run and a fantastic finish. First, Diogo Jota brought the ball down on the left flank and flicked it past Lucas Moura. The Portuguese was still deep inside his own half at this point, but he raced forward and was inside opposition territory within seconds.

Jota picked the perfect pass at the right moment, teeing up Raul Jimenez on the edge of Tottenham's penalty area. The Wolves striker pushed the ball forward and then cut inside Japhet Tanganga, before finishing coolly into the top corner of the net with his left foot. For the second time that afternoon, Wolves had come from behind - and now they were ahead.

There were no more goals at the Tottenham Hotspur Stadium, as Nuno Espirito Santo's side held on for a 3-2 victory. This was a fantastic result against a rival for Champions League qualification. Wolves are now just three points behind Chelsea in fourth place. What is more, they are outside fifth spot - which will bring with it a place in Europe's principal competition if Manchester City's continental ban is upheld by the Court of Arbitration for Sport - on goal difference alone.

That is a remarkable achievement for a team who are also going strong in Europe this term. Wolves advanced to the last 16 of the Europa League last week, setting up a two-legged tie with Olympiacos that will take place later this month. Nuno has done a brilliant job of balancing two competitions this term, even if Wolves have understandably not taken the two domestic cups quite as seriously (they were eliminated in the third round of the FA Cup and the fourth round of the League Cup).

At the start of 2019/20, there was real concern that Wolves might have to sacrifice either the Europa League or the Premier League. Forced to begin their continental campaign in July, the Midlanders started the top-flight season slowly. They failed to win any of their first six encounters, leaving them in the relegation zone towards the end of September.

The turnaround since then has been magnificent; only Liverpool, Manchester City and Leicester can better their subsequent points return of 38, and only Jurgen Klopp's side have lost fewer games. Wolves have climbed from the bottom three to the top six, while simultaneously establishing themselves as one of the favourites to win the Europa League.

"It's amazing the energy levels that we put into the game," Nuno said after Sunday's success in north London. "They recover very well. It's a challenge, and when you really embrace the challenge you give everything you have, and this is what we are doing.

"We should start the game better. Tottenham is such an amazing team and can create so many problems. The second half was much, much better, more organised, better pressing and the movements for the goal was good."

Wolves' accomplishments this season are even more impressive when you consider that Nuno favours a small squad. Wolves have used only 20 players in the Premier League this term, fewer than any other team in the division.

Fatigue may yet hit before the end of the campaign, but Wolves show no sign of slowing down right now. Beat Brighton and West Ham in their next two Premier League outings and a place in next term's Champions League may well be theirs to lose.