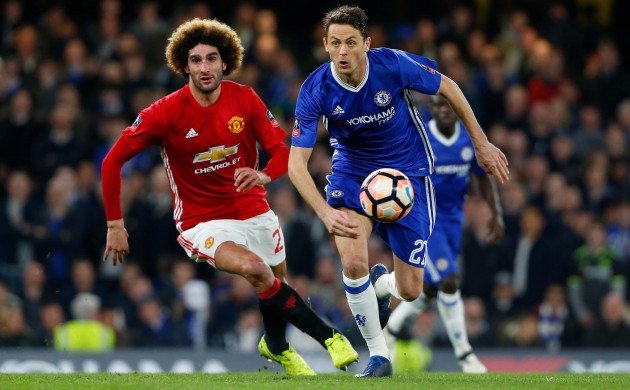 When Nemanja Matic swapped Chelsea for Manchester United at the end of July, both sets of supporters appeared fairly underwhelmed, which is unusual when a player moves between title rivals.

Chelsea fans claimed that Matic had been more of a hindrance than a help when they won the Premier League last season, while United supporters understood that the Serb's best years were probably behind him.

However, when examining Matic's performances last term, it's worth noting that until the final week of the season, the midfielder was played by Antonio Conte in every league game, other than when he missed the Manchester City fixture through injury. He may not have been as influential as N'Golo Kante or Eden Hazard, but Matic wasn't a passenger either.

Jose Mourinho was extremely keen to link up with Matic again and will believe that Chelsea's loss is United's gain. The Portuguese proclaimed that Matic "represents everything we want in a footballer", hailing the midfielder's loyalty, consistency and ability to put the team first.

In the Super Cup against Real Madrid, Matic put in a very impressive shift. He was overworked yet still managed to make important challenges, track back to put his opponent under pressure and, most impressively, pass the ball around expertly.

His distribution was a welcome surprise to many United supporters. On several occasions he played brilliant passes to the players ahead of him and moved the ball around quickly, spotting the right player on the move. With seven assists last season, he created more goals than anyone at United, so the Serbia international clearly has more to offer than just his defensive work.

Ahead of Chelsea's defeat in the Community Shield against Arsenal, Conte made it clear that the decision to allow Matic's transfer was not his. "Ask the club about this," was his answer when journalists questioned the thinking behind the sale. He’s since called Matic a "really good player" who was "very important" to the team, as well as labelling his departure a "great loss" to the Blues.

The Chelsea captain, Gary Cahill, has echoed this sentiment, calling Matic a "fantastic player" and stressing the importance of his role shielding the defence, which is particularly noteworthy given that Cahill, a centre-half, is someone who would be fully aware of his impact.

In an era of Financial Fair Play, Chelsea perhaps felt that £40m was too much to turn down for a player approaching his 29th birthday. Only United and Manchester City have spent more than the Blues in this transfer window, so the champions clearly wanted to recoup some cash. The other question mark is whether they could have sold Matic abroad, rather than to a direct domestic rival.

The player wanted to work with Mourinho again, though, while United offered its own pull. It's reminiscent of when Robin van Persie moved to Old Trafford from Arsenal, claiming that he couldn't ignore the "little boy" who would have dreamed of turning out for the club. The Dutchman fired United to the title in 2012/13, leaving the Gunners full of regrets.

Having been such a loyal servant to Chelsea, Roman Abramovich may have felt compelled to give Matic the move he craved, as had previously been the case when Petr Cech moved to Arsenal.

Still, there isn't much room for sentiment in football and this move could be a costly one for the Blues. Gary Neville has called the decision "strange" and suggested that selling a player against Conte's wishes won't do much for his relationship with the club.

"I have no doubt that he has not sanctioned that move, he is not happy with it and ultimately he is uncomfortable with it," Neville told the Premier League launch show. "When a player leaves a club, you do not normally see a manager speak so glowingly about them. But he spoke about him in such a way about his incredible importance to the job they did last year."

Matic is unlikely to grab the headlines in the way that Van Persie did, but he could play a similarly vital role in bringing the Premier League trophy back to Old Trafford. The fact that he's a no-frills player may actually help, allowing Paul Pogba and Romelu Lukaku to steal the show ahead of him.

United face some strong competition at the top of the division, but if Matic does prove to be the missing piece of Mourinho's jigsaw, Chelsea will have made a major mistake.