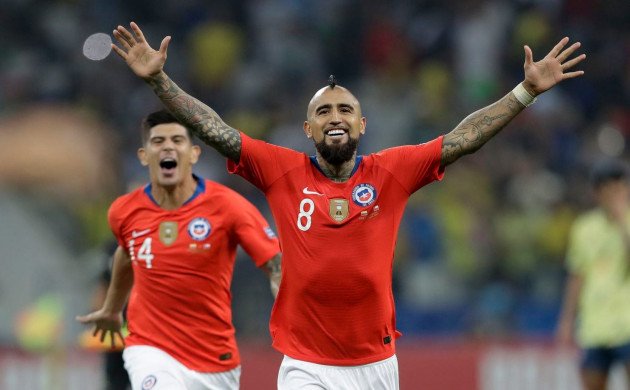 A failure to qualify for last summer’s World Cup seemed to mark the end of a glorious era for Chile’s golden generation. The team that reached the knockout stage of the 2014 World Cup and then won back-to-back Copas America in the two years that followed was undoubtedly the greatest the country had ever produced. Yet missing out on Russia appeared to signal the need for a new chapter.

In many ways that remains true, with almost half of Chile’s 23-man squad for the 2019 Copa America aged 30 or over. However, there could still be one final roar for this generation, who will reach a third consecutive continental final if they beat Peru on Wednesday night Brazilian time.

Four years ago La Roja made the most of home advantage to win the Copa America for the first time. Expertly managed by Jorge Sampaoli, Chile produced some exhilarating football in 2015, pressing hard, defending high and attacking at speed. After single-goal victories over Uruguay in the last eight and Peru in the semi-finals, they overcame Argentina on penalties after 120 minutes of goalless action in the Santiago showpiece.

Sampaoli had been replaced by Juan Antonio Pizzi by the time of the Copa America Centenario a year later, but the outcome was the same. Chile took a while to get going in the United States, losing their opening game to Argentina and only qualifying for the knockout phase as Group D runners-up, but they went on to demolish Mexico 7-0 in the quarter-finals, before easing past Colombia 2-0 in the last four. Facing Argentina once more in the final, Chile again triumphed on spot-kicks after another 0-0 stalemate.

Having taken 10 points from a possible 18 in World Cup qualification fixtures prior to the Copa Centenario, La Roja followed up their success in the States with some patchy results in their bid to reach Russia. They eventually dragged themselves into the final automatic qualification spot with four matches left to play, but a disastrous run of one victory and three defeats saw them slip down to sixth, with Peru sealing the play-off place thanks to their superior goal difference.

Pizzi departed after Chile’s failure to reach the World Cup, with Reinaldo Rueda confirmed as his successor in January 2018. The Colombian was tasked with rebuilding the side but a lack of emerging prospects of the requisite quality meant the holders arrived in Brazil last month with the likes of Alexis Sanchez, Arturo Vidal, Gary Medel, Mauricio Isla and Charles Aranguiz still key members of the starting XI.

The fact that the above names are entering the latter stages of their career has meant that Chile are no longer able to play the same high-tempo, all-action style of 2015. They have, however, still produced some fine football at times in this tournament, and they deserved to beat Colombia in normal time of last week’s quarter-final, even if their progress was only confirmed by a penalty shoot-out triumph. With a squad of players who know what it takes to triumph in the Copa America, Chile could become the first team to win the competition three times in a row since Argentina in the 1940s.