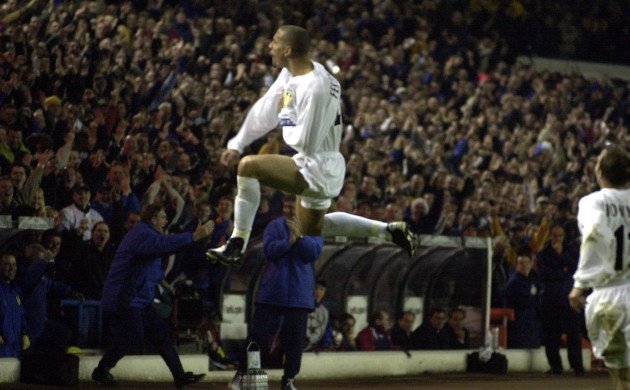 Leeds 3-0 Deportivo: Remembering one of the greatest nights in the club's modern history

Leeds United fans are in a positive mood right now. The Whites have, for the most part, coped well with their return to the Premier League following promotion from the Championship last season, and in Marcelo Bielsa they have a manager who the entire fan base is behind. Leeds have been tipped to not only avoid relegation this term, but to potentially secure a top-half finish.

One thing they are unlikely to do is qualify for the Champions League, meaning it will be more than 20 years outside of Europe’s leading competition for the Yorkshire outfit. Their last appearance came back in 2000/01, when Leeds went all the way to the semi-finals. That season gave some terrific nights to the club’s supporters, none more so than the 3-0 victory over Deportivo La Coruna in the first leg of the quarter-finals.

That victory in front of a raucous Elland Road crowd on 4 April 2001 all but secured Leeds’ progression to the semi-finals, where they would ultimately come unstuck against runners-up Valencia. On this night, though, Leeds fans dared to dream that their team were European champions in the making.

Leeds had qualified for Europe’s foremost competition after ending 1990/00 in third, edging out Liverpool by two points to finish in what was then England’s final Champions League qualification spot. They endured a disappointing first half of the domestic season the following year, dropping as low as 13th after 20 Premier League games, but proved to be a far tougher nut to crack on the continent.

After beating 1860 Munich home and away in the qualifying round, Leeds began the competition proper with a humbling 4-0 defeat by Barcelona. They remained unbeaten for the remainder of the first group stage, however, famously beating Milan 1-0 at home and also holding los Cules to a draw in Yorkshire. That proved decisive, allowing Leeds to progress to the next round marginally ahead of Barca.

David O’Leary’s side also excelled in the second group stage, amassing 10 points from a possible 18 to advance alongside Real Madrid, and ahead of Anderlecht and Lazio. They may have been beaten twice by Madrid, including a narrow 3-2 reverse at the Santiago Bernabeu, but Leeds were unbeaten in their other four encounters. That set up a quarter-final clash with Deportivo, the reigning Spanish champions who had indirectly knocked out Milan, PSG and Juventus along the way.

Given their La Liga triumph the previous campaign and progress through the Champions League in 2000/01, Deportivo were unlikely to be daunted by a trip to Elland Road. Nevertheless, it was the hosts who started the brighter, with the first chance of the evening falling to Harry Kewell, who did superbly to cut infield from the left before firing a shot over the bar from a tight angle.

Leeds continued to assert their authority and, with 25 minutes on the clock, they had a tangible reward for their efforts. After Alan Smith was brought down on the edge of the penalty area by Cesar Martin, dead-ball specialist Ian Harte stepped up and curled a wonderful free-kick past Jose Molina and into the back of the net, sending Elland Road into raptures.

Leeds were electric, and they did not let up in the slightest after drawing first blood. The home side were first to every loose ball and played with a speed and tempo that Deportivo struggled to cope with. Rio Ferdinand was controlled but aggressive at the back, while Olivier Dacourt swept up in midfield and Kewell was a constant menace down the left. It was the Australian’s cross that almost led to a second goal, but Smith could only head the ball wide after arriving at the back post.

Leeds would have their second shortly after half-time. It came courtesy of Smith, who powered a header past Molina after Deportivo had failed to completely clear their lines from a corner. Dacourt did well to keep the ball alive and set Leeds back on the attack, feeding Harte down the left and watching on as the Irishman delivered a fine cross right onto the head of Leeds’ homegrown striker.

Deportivo had looked uncomfortable when defending set-pieces all night, and they were made to pay once more in the 66th minute. The visitors failed to deal with Harte’s corner at the near post, allowing the ball to reach Ferdinand, who rose highest to score his first goal for the club following an £18m move from West Ham United the previous November.

Deportivo belatedly began to threaten late on, with substitutes Juan Carlos Valeron and Walter Pandiani posing the most danger to Leeds’ three-goal cushion, but it was a case of too little, too late for the Spanish side. They had been outthought and outfought by their hosts all evening, and the 3-0 result was an accurate reflection of the Whites’ dominance.

Leeds proceeded to lose the second leg 2-0 but the strength of their performance in the first meeting ensured their progress. Valencia proved too strong in the semi-finals, running out 3-0 aggregate winners after a scoreless stalemate at Elland Road, but O’Leary’s men could look back on their European exploits with pride – at least before the Leeds project all came crashing down in financial ruin a few years later.