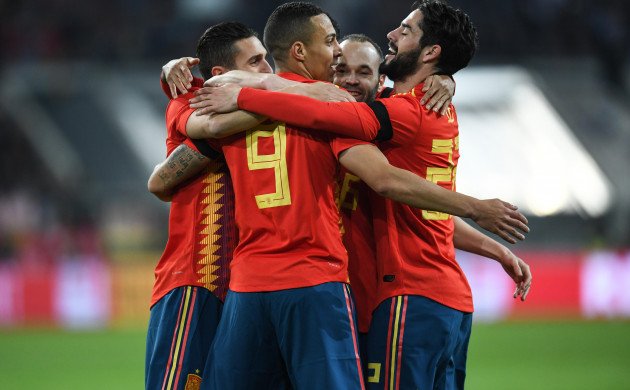 When Julen Lopetegui was installed as Spain boss, players’ ID cards would not matter - as the native phrase goes. Name, age and reputation were not a basis upon which to pick his squads, with the promise of form and performance levels the required criteria to make it into La Roja.

After an era under Vicente del Bosque, where the old guard were trusted too extensively in the tail end of his reign, it was a breath of fresh air. There was speculation about whether Lopetegui would favour those players he had coached at youth level for Spain, but the same criticism could be flipped on its head given that the former Porto coach knew the same players’ possible foibles too.

Spain’s journey through World Cup qualification was a smooth one, with the only potential stumbling block a lack of striking talent. Diego Costa naturalised to become the man to lead the line, with Athletic Club’s Aritz Aduriz getting an odd look-in due to his goalscoring record at club level over the last few seasons. From the apparent dearth of forwards, the only weakness to previously point at from Spain’s talent pool, things have slotted into place nicely with Russia in sight.

Against Germany last week, Rodrigo rattled home another international goal after being entrusted with a start as Lopetegui’s No.9, with Diego Costa then taking little time against Argentina to open the scoring at the Wanda Metropolitano in La Roja’s second friendly of the break. Iago Aspas came off the bench against a Lionel Messi-less Albiceleste to score once and assist twice, with only Alvaro Morata failing to show why he deserved a place on the plane.

With the question of who to take to the upcoming World Cup now more of a managerial headache given the amount of in-form options, Lopetegui will much prefer his current situation to the past, one-dimensional approach of picking Costa as a his leading striker. Rodrigo and Iago Aspas are in terrific goalscoring form this season, and the pair offer pace, mobility and the skill set required to play either in wide areas or off a target man if needed. There are a lot of different combinations to try should the situation arise.

It is unlikely, however, that La Roja will need to juggle things in attack. Instead, their fluid and creative midfield should be more than enough carry them through the early stages of the World Cup without too much fuss. Isco led the way against Argentina with a hat-trick, showing his obvious talent after a quiet domestic season thus far with Real Madrid, while Thiago, the evergreen Andres Iniesta and Koke kept things ticking over in such a controlling manner that the absence of Sergio Busquets was not felt.

Dani Parejo and Marcos Alonso were both handed debuts as rewards for their sparkling form for their club sides over the last six months, with the likes of Saul and Lucas Vazquez coming off the bench with a history of real cutting edge and a nose for a goal in both La Liga and Europe this campaign. As far as being stocked with strong options in every area, it is tough to look beyond Spain as one of the most well-equipped and balanced groups heading into the World Cup.

On paper Spain are strong, but the biggest achievement of the Lopetegui reign is that he's rejuvenated a group that had become stale under his predecessor. There is renewed energy, identity, a team spirit and an entertainment value which threatened to be lost. Talk had turned to the changing of the guard, but Lopetegui’s rotation, system and general desire to mix inexperience with old heads has allowed youthful spirit to pick up any semblance of slack.

At the Wanda, Spain enjoyed their football. It is easy to during a 6-1 thrashing of a supposed close rival, but some positive responses towards Gerard Pique from the crowd in Madrid showed the extent to which La Roja had impressed their public. There is a positive spirit as Russia approaches, with a fluid, controlling midfield coupled with several strikers who aren’t thinking twice about taking their chances for their country.

In Sergio Ramos, Gerard Pique, Sergio Busquets, Andres Iniesta and David Silva, Lopetegui has a host of talent which boasts plenty of experience of both participating and succeeding at a World Cup. Their supporting cast in the build-up to the 2018 edition are flying high off the back of domestic form, with their national team boss simply encouraging them to express themselves and show their confidence while adhering to an organised and balanced system. There is nothing spectacular about their collective style, but it provides the basis for their excellent array of individual talent to have an adequate springboard from which to impress.

Spain are well armed, boast a true depth of talent and, most importantly, are all smiles as the summer approaches. Good performances against Germany and Argentina highlight that La Roja are well on their way, with a false start in the group stage four years ago not likely to reoccur. Spain's No.9 dilemma is no longer a concern, with their methodical, simple dismantling of Argentina acting as a warning shot to the rest of the competition.