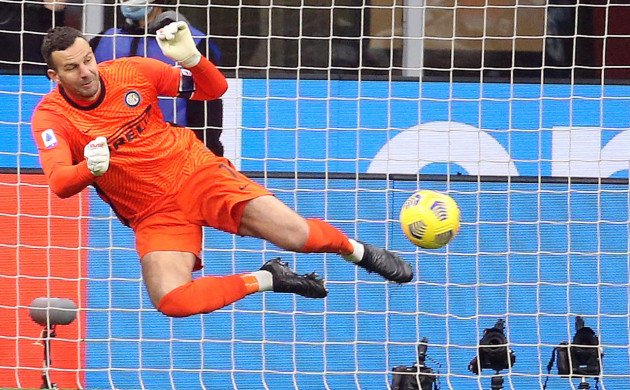 When you keep the goals for a club for the best part of a decade, fans become increasingly used to your strengths and faults. And while Samir Handanovic was once regarded as perhaps the best goalkeeper in the world, the Slovenian has fallen on tougher times in recent years. As the player approaches his late 30s, injuries and mistakes have become more commonplace. So much so that many Internazionale fans have been calling for the Slovene to be replaced for many years.

That now looks to happen in the summer of 2022. Handanovic is expected to move on from Inter, perhaps to retire, in the summer. In his stead will be Andre Onana, the Ajax goalkeeper. The Cameroon international has been linked with several positions and clubs, as his Ajax deal comes to an end. However, he will instead make the move to Inter as key reports in Italy suggest the deal is all but done.

An agreement with the player was reached months ago, and it is expected the deal will be announced in early 2022. Some expect Inter to push to sign the player in the January window, bringing him in to compete with Handanovic until the summer when an uncoupling will take place.

For Inter fans, this could be the beginning of major change across the club. The ability to grab a ball-playing goalkeeper with immense agility, though, is a great opportunity. To pick up someone with so much experience for nothing, too, is a directors dream.

Ajax, though, are resigned to losing the player despite hoping they could agree a deal with a set release fee. Given the issues the player has had off the field, there was hope he would repay the loyalty shown by the Dutch giants. That, though, is now fading.

Will Inter make any other signings in January 2022?

While Onana is expected to arrive for nothing in the summer, he might also arrive in January for a small fee. Inter, though, are keen to add some new faces to the team as they look to rejig the club. The veteran Chileans of Arturo Vidal and Alexis Sanchez might leave in the January window, paving the way for Inter to move for a new forward.

Gianluca Scammaca has been mentioned, though links exist to Andrea Belotti. Despite being a lifelong Milan supporter, Inter are believed to be closest to landing the Torino striker on a free agency deal when his contract runs out in 2022.

There may be some other deals in the pipeline, too, as Inter look to rebound from a summer which seen many key title-winning players moved on. With the current Italian champions off the pace in the title hunt, there is more work needed to get them back to competing after so much upheaval in the summer.

Expect to see some deals lined up for the Nerazzurri in the winter window. Onana, though, is the key target – either now or for the summer.

There are lots of soccer fans in the United Kingdom, which is not a big secret. However, snooker is also very popular in the UK and the majority of the players in snooker rankings are from the United Kingdom. There plenty of sites which are covering top snooker tournaments and in-depth player profiles, but talking about amateur snooker in the UK leaves us with only a few options, and one and the best of them is snookerhub.co.uk who will be pleased to have you as a visitor.