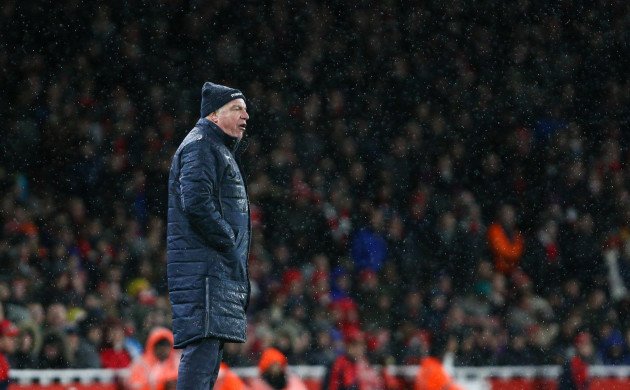 Crystal Palace supporters have seen several memorable victories and standout performances since their side’s promotion to the Premier League in 2013, but none can top Monday night’s defeat of Arsenal.

The comprehensive nature of the win and the dominance the Eagles were able to exert over such illustrious opponents means the 3-0 triumph ranks higher than previous successes against Chelsea, Manchester City, Tottenham Hotspur and Liverpool. Even more importantly, it moved Sam Allardyce's charges six points clear of the drop zone ahead of Saturday's clash with Leicester City. All of a sudden, Premier League safety is well within their sights.

When the former Bolton Wanderers, Blackburn Rovers and Sunderland boss failed to work his magic at Selhurst Park early on, some questioned whether he had lost his hunger for the game after seeing his England dream die after just a single encounter at the helm. Allardyce's first match on the Palace bench ended in a 1-1 draw with Watford, with Christian Benteke guilty of spurning a golden chance to put the visitors to Vicarage Road 2-0 up shortly before half-time. Had the Belgium international converted his spot-kick, it may have been a turning point in the club's campaign; instead, Palace proceeded to lose their next four fixtures by an aggregate scoreline of 8-1.

The bleakest defeat came a little later: supporters were expectant when Sunderland arrived at Selhurst in early February, but the south London side looked frail, feeble and frightfully low on confidence. A 4-0 home reverse meant Palace had still kept only two clean sheets all season, while they were also scoring an average of just 0.66 goals per game under Allardyce. A 1-0 loss at Stoke City the following weekend saw the Eagles sink to 19th place, with goal difference the only thing keeping them off the foot of the table.

But then it all changed. Palace were not brilliant in a must-win clash with Middlesbrough, but they were defensively resolute and did enough to earn their first top-tier triumph in front of their own supporters in two and a half months. Next, Allardyce’s side ran out deserved 2-0 winners against West Bromwich Albion, before Watford (1-0) and Chelsea (2-1) were also beaten to make it 12 points from a possible 12. A defeat by Southampton followed, but Palace responded in magnificent fashion against Arsenal, as they outfought, outthought and outplayed Arsene Wenger’s men in front of a raucous home crowd.

It is a touch ironic that Palace's winning streak has coincided with Allardyce's intensified calls for his team to 'respect the point' rather than always chasing the victory and leaving themselves vulnerable at the other end. Topsy-turvy meetings with Burnley (a 3-2 loss), Swansea City (a 4-5 loss) and Hull City (a 3-3 draw) had seen Alan Pardew's charges recklessly relinquish positions of strength in the first half of the season, and it seemed to take a while for Allardyce to change the mindset of a squad who had spent two years under the guidance of his more carefree predecessor.

He has certainly managed to do that now. Palace have kept five clean sheets in their last six outings, with the only concession coming against runaway league leaders Chelsea. Mamadou Sakho has been exceptional in the heart of the backline and fellow January addition Luka Milivojevic has stabilised the midfield, but the biggest factor has been a collective improvement in the side’s setup and shape without the ball. Palace are much more compact and better organised under Allardyce, but that has not come at the expense of the team’s attacking intent: Wilfried Zaha has been terrific all season long, Yohan Cabaye has been liberated by the presence of Milivojevic and Andros Townsend looks like a different player to the one who failed to shine in the first few months of the campaign.

There is still work to be done before survival can be celebrated, particularly as Manchester City, Liverpool, Tottenham and Manchester United make up over half of Palace’s remaining opponents. Allardyce has reinvigorated the club after a sticky start, though, and another season of Premier League football looks to be on its way to Selhurst Park.