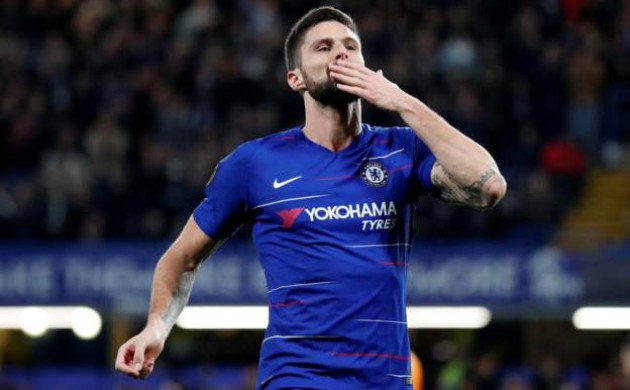 The Europa League has been a stroll for Chelsea so far this season. Needing only a point to seal top spot in Group I on Thursday night, Maurizio Sarri’s side cruised to a 4-0 victory over PAOK Salonika to make it five wins from five in the competition.

PAOK realistically needed all three points to keep their own qualification hopes alive, but things started badly for the visitors and soon got worse. A last-man foul by centre-back Yevhen Khacherid saw the Greek outfit reduced to 10 men in the seventh minute, a turn of events which made their chances of an upset even slimmer.

Chelsea dominated proceedings in the opening stages but had to be patient as they searched for a deadlock-breaking goal. Balls over the top caused particular problems for the PAOK backline, and Olivier Giroud, Pedro Rodriguez and Callum Hudson-Odoi all had chances to edge the hosts ahead in the first quarter of an hour. It was Giroud who eventually gave Chelsea the lead in the 27th minute; Pedro magnificently controlled a long pass forward before teeing up the Frenchman, who rolled a Thierry Henry-esque finish – albeit from the other side of the box – into the bottom corner.

The waves of Chelsea attacks kept coming, with PAOK only sporadically able to break out of their defensive shape. Sarri did not seem particularly happy with his team’s defending in transition, but the Premier League side spent the majority of the first half camped inside their opponents’ half of the field. Hudson-Odoi’s trickery caused problems for right-back Leo Matos and Davide Zappacosta continually galloped forward on the opposite flank, with Cesc Fabregas pulling the strings from the centre of the park.

Hudson-Odoi, the teenage talent making his first start of the season, cracked an effort against the bar shortly after Giroud’s opener, before the Frenchman doubled the Blues’ advantage with a fine volley after being picked out by Fabregas.

PAOK were unable to stem the tide in the second period, when they were again forced to sit deep and chase the ball. Playing with 10 men for so long was always going to be difficult given the gulf in class between the two teams, and Chelsea did a good job of ensuring the tempo and intensity of their play remained high.

Hudson-Odoi scored the first goal of his professional career on the hour mark, facing up his marker on the corner of the box and then catching out goalkeeper Alexandros Paschalakis by firing the ball into the near post. The Chelsea academy product then turned provider late on, crossing for substitute Alvaro Morata to head home a fourth.

Sarri has managed the Europa League well so far, handing game time to fringe members of his squad and players looking to build up their fitness. The group stage has been straightforward for Chelsea but there will undoubtedly be sterner tests to come after Christmas, when Sarri will have to decide exactly where Europe’s junior competition ranks on his order of priorities.