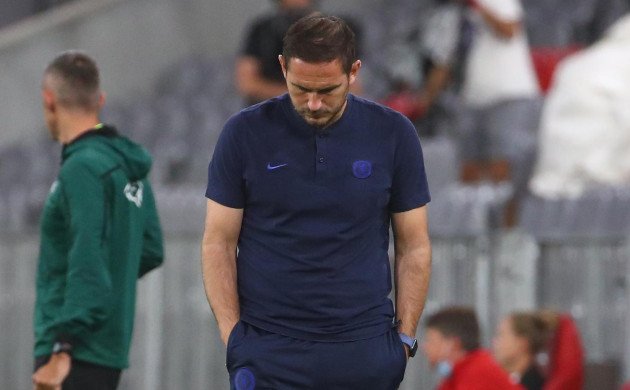 Chelsea may have achieved their primary objective for the 2019/20 season by finishing in the top four of the Premier League, but their campaign nevertheless ended in disappointing fashion.

Each of the club’s last two games ended in defeat. The first was a 2-1 loss to Arsenal in the FA Cup final, which was followed a week later by a 4-1 thrashing by Bayern Munich in the second leg of their last-16 clash in the Champions League. That meant the Blues lost the tie 7-1 on aggregate, further underlining how far they still have to travel before they are capable of competing for the game’s biggest prizes once more.

Being comfortably beaten by Bayern Munich – arguably the strongest team on the continent right now – is no great shame, particularly when you consider the wider circumstances. The campaign that has just ended was Frank Lampard’s first as manager of the club he represented with distinction as a player, and Chelsea were hampered by a transfer ban last summer. Reaching the first knockout round of the Champions League was par for the course, and a kinder draw may well have seen the west London outfit advance to the quarter-finals.

In the Premier League, meanwhile, a top-four finish – secured on the final day thanks to a 2-0 victory over Wolverhampton Wanderers that ultimately proved redundant due to Leicester City’s loss to Manchester United – was a good achievement. Chelsea did succumb to some disappointing defeats after the restart, but it is hard to argue that, after 38 games and almost 12 months of action, they did not deserve the prize of Champions League qualification.

All in all, 2019/20 was a positive campaign for Chelsea, and the club have already issued a statement of intent in the transfer market ahead of next season. Timo Werner and Hakim Ziyech have already been added to the squad, with both players set to add further firepower to a side that already had multiple attacking tools at its disposal. Kai Havertz could also be on his way from Bayer Leverkusen, while the end-of-season form of Christian Pulisic also bodes well for next year and beyond – although the United States international looks set to miss the start of 2020/21 through an injury he sustained in the FA Cup final.

However, it is somewhat surprising to see Chelsea invest so much time and money on improving their attack when their primary weakness patently lies at the other end of the field. The Blues conceded more goals than any other team that finished in the top half of the Premier League table last term, while the backline of 14th-placed Crystal Palace was also breached less often than theirs.

“In terms of defensively, there is a way that I want us to play and it’s not gung-ho, it’s not crazy” Lampard said during the Premier League season run-in.

“Some of it is work and that’s something we will see and it’s part of the process we are in. I don’t like it, I hate conceding goals but we have to work harder on it.

“I don’t think any team in modern football are going to say ‘We’ve got that one defensive partnership’. You go back and talk about a John Terry-Ricardo Carvalho partnership, but in the modern day, I don’t think you will find too many clubs to name the two.

“It’s a difficult season and a demanding season, so I’m not saying I just want to pick two centre-backs because you need competition of probably four centre-backs within a squad and then you need them knocking on the door.

“You want to be able to say to players ‘You are not doing enough’ or the two that are playing keep deserving to play. I don’t think it’s about just a partnership. Can we be more settled if we improve? Yes, for sure.

“Will it be just two players who are going to be your centre backs? I don’t think that’s going to be the case.”

Lampard is right to point out that multiple centre-half options are required given the hectic nature of today’s football calendar, but there are more ways to improve a team’s defence than by signing better individuals. Carvalho and Terry were world-class players, of course, but the same cannot be said – with all due respect –about the centre-backs at Burnley, Crystal Palace and Sheffield United, yet all those teams still managed to concede fewer goals than Chelsea in 2019/20.

Lampard can make his side better organised and more resilient on the training ground. There is only so much improvement to be made via this avenue and the importance of recruitment should not be underestimated, but Chelsea are frequently too open from front to back and have clear structural issues without the ball.

That is an area in which Lampard’s side must get better if they want to challenge for the Premier League title any time soon. Signing individual centre-backs, no matter their quality, will not be sufficient on its own.