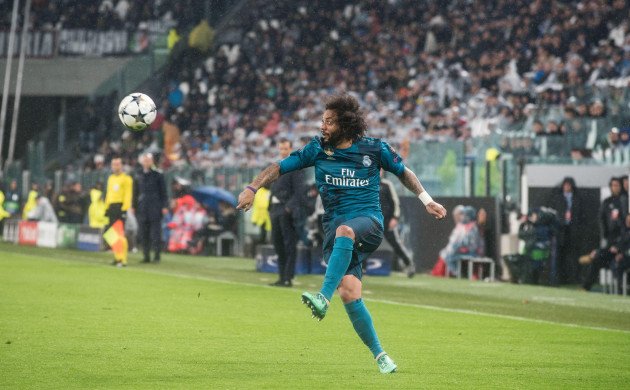 Sergi Roberto galloped down the right-hand side without any obstacle in his way, stretching his legs as he strode into the final third. A well-directed cross from his right boot found the figure of Luis Suarez at the back post, allowing for the Uruguayan to continue his excellent goalscoring form in El Clasico by sweeping home a neat finish to give Barcelona the lead in Camp Nou’s latest derby.

Marcelo had been caught inexplicably far upfield in the build-up, as Zinedine Zidane’s side kept a very high line, with the Brazilian unable to make up the yards required to try and recover and make things difficult for the advancing Sergi Roberto. A third-man run from the Barça right-back had taken him out of the game entirely, and yet again it was all too obvious that Real Madrid had collapsed due to an absent party on their left flank.

In the build-up to los Blancos’ Champions League semi-final tie against Bayern Munich, the German media picked out Marcelo as ‘der Knackpunkt’. A crucial player, but the interpretation of the headline alone left it a little open for the public to mull over. A nice touch, given that the Brazil international could quite easily be the key driving force in attack, but it has become all too familiar to see teams target the left-back due to his frailty on the defensive side of things.

That has been the story of recent weeks. Marcelo’s well-weighted cross allowed for Karim Benzema to turn home an equaliser in the Champions League semi-final second leg at Estadio Santiago Bernabeu, after a lovely finish from the Brazilian got Zidane’s men back on levels terms the week prior at the Allianz Arena.

There is undoubtedly huge offensive potential generated from Real Madrid’s left-hand side, with Marcelo a shining light when he gets the chance to maraud upfield. When Zidane’s side lifted the double in the 2016/17 campaign, it was he and Dani Carvajal who offered plenty of width and ammunition from the wide areas, with his blistering runs against Bayern in Europe highlighting exactly why the German media were so keen to emphasise his potential contribution the second time around.

As Sergi Roberto made his way forward to assist Barça’s El Clasico opener, however, it felt as though lessons were not being learned. Zidane has always shown his loyalty towards his big players since becoming Real Madrid boss, but deploying the same defensive line with the same personnel is a big gamble. In the business end of the campaign, when the stakes could not be higher, Marcelo failing to offer enough resistance at left back looks to be an obvious chink in the armour for Liverpool to aim for.

Mohamed Salah, Sadio Mane and Roberto Firmino have made up a spring-loaded, entertaining and very pacy attack for Jurgen Klopp this campaign. In Kyiv, Salah will be the man to presumably match up versus Marcelo, and the Egyptian’s form this season is far more scary than that of Barcelona’s Sergi Roberto. Give Salah an inch, and he is capable of accelerating to a pace where he can stretch his gains to a mile, and in a European final neither side can be charitable.

Zidane has a number of options at his disposal, but an ill-timed injury to Dani Carvajal may have scuppered a potential solution for Real Madrid. Marcelo has sparingly been used on the left-hand side of midfield under the Frenchman, with Nacho a useful replacement at left-back. The Spanish defender is one of, if not the quickest player within los Blancos’ squad, and his ability to play all across the back four could have been a useful trait to employ.

El Clasico saw Nacho line up at right-back, after Lucas Vazquez filled in for Carvajal versus Bayern, and it shows that Zidane has some leeway to experiment. Nacho could be a more resilient defensive option against Liverpool, with Marcelo having the tools to play a little further forward should Real Madrid seek further balance.

Failing that, Zidane has used the likes of Mateo Kovacic and Luka Modric in slightly wider midfield areas in the past, with one individual asked to tuck in tightly and protect a weak full-back whenever los Blancos are out of possession. The only certainty is that Real Madrid’s obvious weakness must be addressed before their flight to Ukraine.

Marcelo’s quality is clear, but should Zidane continue to employ a high line and leave his Brazilian full-back potentially exposed against one of the most in-form players in European football, it can only result in disaster. There are remedies available, but no formula has been made apparent yet, leaving there plenty to be done on the training field ahead of los Blancos’ make-or-break Champions League final clash.