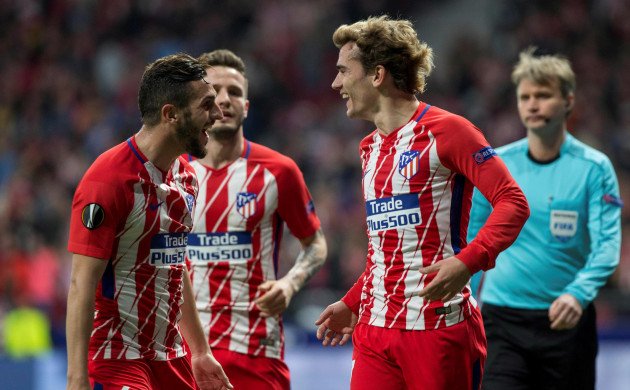 Arsene Wenger’s decision to step down as Arsenal manager could not have come at a worse time for Atletico Madrid. The announcement will only galvanise both his players and the club’s fan base, with the dream being for the Frenchman to sign off from his lengthy era at the helm with a trophy in hand. The Europa League would be the icing on the cake, but Diego Simeone’s side have the same goal in mind.

The fact that Atleti can put in a steadfast performance at the Wanda Metropolitano is not up for debate. Los Colchoneros have kept 11 straight clean sheets at home across all competitions, with only Girona and Sevilla able to manage a goal apiece at Madrid’s latest stadium addition in 2018. Simeone’s side like to be organised, calculated and at times negative, with their unwillingness to allow games to become open allowing them to consistently edge their way to three points.

The issues arise on the road. One win, one draw and four losses in their last six competitive away games paint the picture of an Atleti side who are struggling to find that same binary identity on their travels. Most recently, they have failed to hit the back of the net against both Real Sociedad and Sporting, but Diego Costa is a possibility to return to the fray after a hamstring injury.

When Simeone was asked at his pre-match press conference as to whether his side would be looking to keep a clean sheet or get themselves an away goal, he allowed himself just one response, “to win.” Atleti’s track record has been bleak on the road, but if they are to bring Arsenal to the Wanda with the aggregate scoreline level or in their favour, the form book point towards them getting the job done comfortably in the second leg in Madrid.

Atleti have the means to keep an opponent at bay, and one of the best goalkeepers in the world in Jan Oblak to help their cause, but chasing a tie would be difficult. Filipe Luis is sidelined until next month due to injury, with Simeone’s side losing a lot of their drive down the left-hand side from full back as a result. Lucas Hernandez is a solid replacement, but lacks the same engine, craft and endeavour to get forward and support the attack.

Filipe Luis’ absence also rules out the possibility of his combination play with Koke, who can often feature on the left and then tuck infield to allow the Brazilian to get beyond him and provide genuine width. Through experimentation in recent months, Koke has managed to get his foot on the ball and enjoy some more controlling spells in an advanced central midfield position, but at the Emirates he will likely be asked to play his typical, workhorse-like role in midfield.

Diego Costa’s return to first-team action at the turn of the year allowed Antoine Griezmann to be freed up and able to show his vision and creativity, but again the Frenchman will likely suffer due to the all-hands-to-the-pump mentality that should come to the fore in London. Earlier in the season, especially in 2017, it was not an unfamiliar sight to see Griezmann dropping exceptionally deep and even hunting down possession well within his own half, putting more effort into helping his midfield than getting himself in favourable positions to counter attack at pace.

Despite Simeone’s instance that Atleti will be looking to win, his thinking will undoubtedly be based over the 180 minutes. While other clubs may see a home second leg as a chance to bring teams back and overturn a substantial deficit, Los Colchoneros simply know that they can trust in being able to edge out a narrow fixture in front of their own fans. Keeping things under control at the Emirates will be the aim.

Given their ability to keep clean sheets at the Wanda and frustrate a vast multitude of teams in 2018, 0-0 would be exactly the kind of result that would be bemoaned by the neutral but lauded by Simeone. With a back four that lacks Filipe Luis’ edge, that will likely protect Oblak closely, the foundations are solid.

The likes of Koke and Saul will be asked to put in more running to harass opponents and ensure that they cover the zones asked of them when off the ball. As Simeone is always keen to preach, it doesn’t matter how much a player runs if they don’t know where they should be running to.

Griezmann and Kevin Gameiro will see what scraps that they can play off, in what should be a fairly cagey game at the Emirates down to Atleti’s desire to keep it that way. Escape England with a stalemate in hand, and things are under control. Allow Arsenal the chance to start believing in themselves and gain momentum, and Atleti may have to start playing outside of their comfort zone.