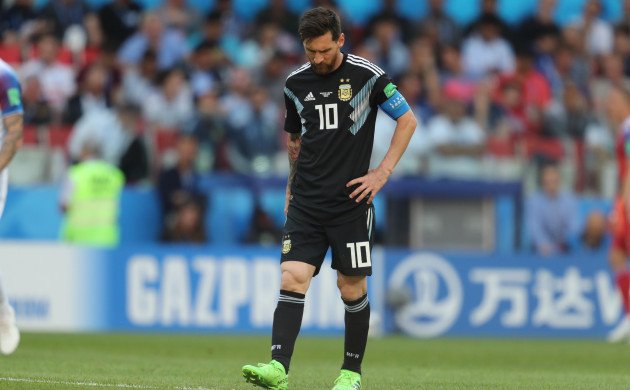 As Messi takes a break from international football, what now for Argentina?

One man could be forgiven for being happy that Lionel Messi is taking a break from international football.

For the Argentine FA, it is bad news. This season is entirely taken up with friendlies, and Argentina can charge much more if Messi is present. But for Pablo Dybala, opportunity knocks. Fitting both Messi and Dybala into the same starting line-up was a dreadful failure in World Cup qualification, and accounts for the fact that the Juventus man made one brief substitute appearance in the World Cup; he played the last 25 minutes of the 3-0 defeat by Croatia on the right wing, and did not feature again.

Dybala had earlier confessed that he found it hard to operate alongside Messi. In the Argentine media this was frequently interpreted as a psychological problem, the youngster over-awed by the proximity to greatness. But it is at least as much a tactical question- both of them seek to operate in the same space.

For the time being, at least, that space would seem to belong to Dybala. With Messi out – time will tell if his absence is temporary or permanent – Dybala now has his first real opportunity to establish himself in the national side. He has been named in the 29-man squad announced by caretaker boss Lionel Scaloni for next month’s friendlies against Guatemala and Colombia.

With Sergio Aguero and Gonzalo Higuain not included, Mauro Icardi has another crack at winning the race to be the centre-forward. Like Dybala, he was a big disappointment in qualification. Unlike Dybala, he did not get a place on the plane to Russia. His chance comes now, along with his new Inter team-mate Lautaro Martinez, just signed from Racing and full of youthful promise.

It is a young squad. Fifteen of the 23 who went to Russia had already passed the 30 mark. The only outfield player in the current squad to have reached that milestone is Sevilla defender Gabriel Mercado.

Scaloni hopes to leave some legacy for the next permanent coach, who may not be named until the start of next year. Consolidating these players with the national team is part of his task, and will be especially important if Messi is not coaxed back by the future regime.

In central midfield, Scaloni will surely give a chance to Paris Saint Germain’s promising Giovane Lo Celso, who mysteriously was the only outfield player in the World Cup squad not to see any action in Russia. There is also a recall for Zenit’s classy Leandro Paredes, who narrowly missed out on a place in the World Cup squad.  But the real problem area is defence.

In forward positions Argentina have enjoyed an excess of options. At the back they have been suffering from the opposite problem, and a glaring lack of defensive pace was a key factor in derailing their World Cup hopes.

Here Scaloni will find it harder to leave much of a legacy. Left-back Nicolas Tagliafico has been retained from the World Cup squad, along with wide men Eduardo Salvio and Marcos Acuna, who have both figured at full-back. And Mercado keeps his place as a utility defender, able to fill in at right or centre-back.

There has been a clearout of the other centre-backs. But some of the replacements do not inspire massive confidence. There is a recall for Ramiro Funes Mori, now of Villareal, who would surely have gone to the World Cup had he been fully fit. The local sports daily Ole! describes his time at Everton as “excellent” – an indication of how far standards have slipped when it comes to Argentine centre-backs. Many Everton fans would be reaching for less flattering adjectives.

Walter Kannemann of Gremio in Brazil is another one cut from similar cloth – a gutsy trier, but short of top class. German Pezzella of Fiorentina might be worth another look, and 21-year-old Alan Franco of Independiente might be one for the future.

But that future still looks very uncertain. Argentina are paying the price for the neglect of their youth sides. Between 1995 and 2007 they won the Under-20 World Cup on five separate occasions, producing a production line of players for the senior ranks. Over the last decade, however, the youth sides have declined dramatically in quality, a development which has affected some positions more than others.

This is why the next choice of coach is so important. He will oversee a project aimed at restoring Argentina to their previous greatness. That might, in the short-term, entail trying to persuade Messi to stick around for a final crack at the World Cup. But in the long-term it means putting a system in place that will produce quality keepers, full-backs and centre-backs – all areas where Argentina have fallen behind in recent times.