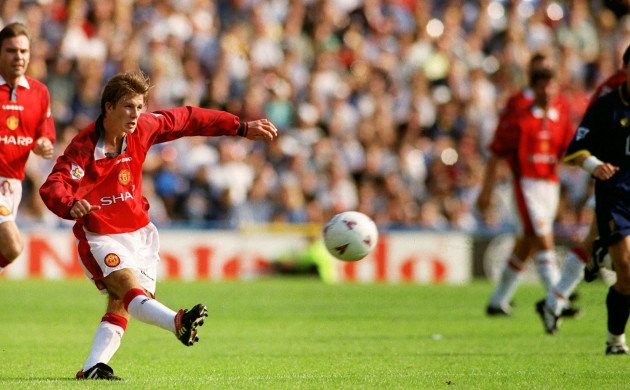 7 memorable matches from the opening weekend of Premier League seasons

Twenty-three years on and this game is remembered for one incident alone: David Beckham’s famous goal from the halfway line. Eric Cantona and Denis Irwin had given Manchester United a 2-0 lead heading into the closing stages at Selhurst Park, before Beckham put the icing on the cake in the most sensational fashion possible.

Spotting Wimbledon goalkeeper Neil Sullivan off his line, the future England captain pinged a superb 60-yard shot over the Scotsman and into the back of the net. “It changed my life,” Beckham recalled later.

On the same day as Beckham’s famous strike, Middlesbrough and Liverpool played out a six-goal thriller at the Riverside Stadium. Fabrizio Ravanelli, a £7m summer signing from Juventus, stole the show in the northeast, bagging a hat-trick on his debut to kick-start a season in which he netted 31 times in all competitions.

That phenomenal haul was not enough to keep Boro in the Premier League, though, nor was his opening-day treble sufficient to give Bryan Robson’s men maximum points. Stig Inge Bjornebye, John Barnes and Robbie Fowler were all on target for Liverpool, who ended the campaign in fourth.

Newly promoted Norwich got the inaugural Premier League season off to a stunning start with a 4-2 victory over Arsenal. The hosts seemed to be heading for a routine win when Steve Bould and Kevin Campbell put them 2-0 up in the opening period, but the Canaries hit back with four goals in 12 second-half minutes to silence Highbury.

It was not just a flash in the pan either: Norwich were eight points clear at the top of the table before Christmas, and ultimately finished third despite a negative goal difference.

Not only were Blackpool widely tipped for relegation in 2010/11, many pundits believed they would oust Derby County of 2007/08 (11 points) as the worst team in Premier League history. It therefore came as a shock when they thrashed Wigan on the opening day, with goals from Gary Taylor-Fletcher, Marlon Harewood (two) and Alex Baptiste getting Ian Holloway’s men off to the perfect start.

The Tangerines did ultimately fall through the trapdoor, but their fate was only sealed on the final day after a 4-2 defeat by Manchester United.

Defences took the day off when Arsenal and Liverpool met in their first fixture of 2016/17. Theo Walcott broke the deadlock with half an hour on the clock, but Philippe Coutinho restored parity on the stroke of half-time with a brilliant free-kick.

Further goals from Adam Lallana, Coutinho and Sadio Mane put the Reds in a commanding position in the second half, but Arsenal made things interesting as Alex Oxlade-Chamberlain and Calum Chambers found the net. Liverpool held on for all three points, though, and it was they who sealed the final Champions League qualification spot ahead of Arsene Wenger’s charges on the final weekend.

“Three players have departed; the trick is always buy when you’re strong,” Alan Hansen said on Match of the Day after a youthful Manchester United side lost 3-1 to Aston Villa on the opening day of the 1995/96 season. “He needs to buy players. You can’t win anything with kids.”

Alex Ferguson would prove his fellow Scot wrong as the season wore on, with United going on to claim the title by four points. They were certainly second best at Villa Park, though, as goals from Ian Taylor, Mark Draper and Dwight Yorke gave Brian Little’s side victory.

They tended to struggle against the erstwhile big four on the road, but David Moyes’ Everton could give anyone a game on their own patch. However, Arsenal made a trip to Goodison Park look easy in August 2010, hitting the home side for six in a scintillating showing.

Denilson, Thomas Vermaelen and William Gallas scored before the break, and Cesc Fabregas made it 4-0 within three minutes of the restart. The Spanish midfielder added another in the 69th minute and Eduardo da Silva got in on the act late on, with Louis Saha’s stopping-time strike nothing more than a consolation.